The Hacking School will launch new Australian accredited programs in India with iCollege and scale up the existing ones in new geographies.

HYDERABAD, India, Sept. 20, 2020 /PRNewswire/ — TheHackingSchool.com (Bootcamp Innovations Private Limited) announced merger with iCollege Ltd, an Australia based, listed education company. The deal was reportedly in the works for about a year now. TheHackingSchool.com is India’s first coding bootcamp, founded by Meraj Faheem, a Hyderabad based serial entrepreneur. This merger will bring iCollege to India and also take the bootcampstyle training to multiple sectors in the majority of the locations worldwide where they operate. TheHackingSchool.com is known for their flagship 13 week long intensive classroom program on web development. 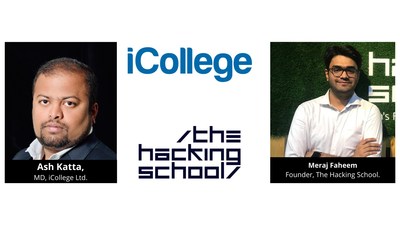 iCollege and The Hacking School is a perfect combination to future proof careers for the millions of young Indians who graduate every year without an employable skill set added Ashish Katta, Managing Director, iCollege Ltd., “This partnership will help us expand our reach and deliver our expertise to regions who have been asking for this for a really long time,” commented Sadiya Sabera, CEO, The Hacking School.

We’ll get going with a snapshot of Zero- It’s 2012, Meraj Faheem and his team at Money Messenger are zooming precariously through the streets of the country, to locate the rarest resource i.e, Good developers. Fast forward 6 years later, Meraj scaled up, growing exponentially over the years, capturing majority market share in the coding bootcamp industry, worldwide as The Hacking School joins iCollege Australia (ASX: ICT)

The Hacking School provides in-person and online training programs in coding, web development, mobile development, blockchain, UI/UX, growth hacking in India and more than 15 cities worldwide. This move adds those bootcamps to iCollege’s mostly university level portfolio extending its reach farther outside traditional brick and mortar classrooms. Also, the coding bootcamp graduates will now be awarded with diploma certificates in Software Engineering and will have an opportunity to get placed internationally.

Ashish Katta, Managing Director, iCollege calls this collaboration, “A big win towards eliminating the back row in higher education.”

Founded in 2013, Hyderabad based, The Hacking School is an immersive, modern approach to teaching full-stack web and mobile software development via code.in. The number of The Hacking School powered programs have skyrocketed from a single course offering at their Hyderabad location to Australia, UAE and USA.

“As technology becomes more important in our lives, just having a diverse group of tech people isn’t going to be enough, it’s about having a say in the future of technology. I want to give India what it actually needs. We need creators, product developers. If you don’t create product developers, you will only have people who will imagine products created by someone else and until then you’ll never be a superpower. For you to become a superpower you have to create something! Having worked with the Government of Telangana as an Innovation fellow and that sense of giving our country, our state, it’s own product that will make the country proud – that sense has become stronger,” said Meraj, Founder at The Hacking School.

The Hacking School has revealed in one of their interviews with dot tech domains about its plans of expanding its bootcamps at the collegiate level and working with the engineering institutes and universities to create a curriculum that will generate an industry-ready workforce, right after college. “We also expect to expand our education and learning programs at a school level with our new initiative kids.code.in, It’s a hands on learning platform with real- time mentor interaction and zero time & geographical constraints. Our futuristic curriculum gives children an edge in virtually every modern industry and can set them up for a lifetime of success. For a new generation of students growing up in a digitally-connected century, all roads lead to code. Need of the hour is to empower children to bring their imaginations to life,” according to the documents.

The concept “Coding for kids” has been proliferating at an enormous rate in the past few years. While it might be difficult to imagine a young mind studying something so seemingly complex, it’s unquestionably an attainable reality and thanks to such programs and websites, Coding can be fun and digestible.

What makes The Hacking School really stand out and ahead of the curve in the game is their ever ready, proactive attitude to deal with the uncertainties the world has to offer. This year is, as we all know, anything but normal, the current Global pandemic has hit all of us in the gut (no-doubt) and it’s an all world crisis.There’s been a socio-economic, political, environmental paradigm shift and like every other company even The Hacking School had to figure out how to adapt.

Meraj proclaimed in an interview with The Indian Express, “Online bootcamp was on the cards always- lockdown or no lockdown. Modern day problems require modern solutions, the way we learn is going to change regardless. All the changes we see are simply being accelerated as a result of this pandemic. The flexibility to schedule your class, choose the program of your choice and 1:1 live interaction with a mentor, is ensuring the outcomes look great. The COVID pandemic crisis has additionally proven to be rather an opportunity to remind ourselves of the skills students need in this unpredictable world such as informed decision making, creative problem solving, and perhaps above all, adaptability. To ensure these skills remain a priority for all students, Flexibility must be incorporated with our educational systems. While we have learned in the recent weeks that social distance is a decent method to flatten an infection curve, virtual interaction/collaboration could be the key to powerful yet effective online pedagogy. Online could be the new normal, only time could tell.”

“India is a country of more than a billion people. To ensure our talent is well respected on the world map, and not just treated as cheap labour, we need to lace them up with skills that are not just future proof, but inventors of the future. We believe there will be a huge shift in demand from degree to skills and we need to focus on that and prepare our masses, i.e. focus on things that matter. With all this, one thing seems super clear- degrees are going to be the new age dinosaurs – extinct.” emphasized Sadiya Sabera, CEO. Adding more to it, Sadiya says, The Hacking School has focus like no one else on empowering be it inside the office or outside. And we believe that Sadiya taking over as the CEO is a testament to it.

“The Hacking School believes in opening gates to the majority of India, targeting those who are intimidated by coding and not just the experienced lot. They call themselves, “India obsessed and not just India focused.”

Sadiya commented: “With all the buzz around deep tech like AI, ML, Blockchain, coding forms the basis. Without coding all of that will be a far fetched dream. As most things are not born from luck or savant level talent, it all comes down to training if you want to compete with the pace of the world. Meraj adds ” I aim at creating an enormous pool of employable, national and international tech talent. Coding is the new literacy, it’s the language of the present. I just want a coder in every home. Is that a lot to ask? I don’t think so.”

“Developers play a key part in growing the tech ecosystem, innovation and economy at large,” says Mohammed Afzal, Head of Products at The Hacking School. “We take a different approach. We engage with their existing interests and help them make something they want to. We aim to give them the tools they need to launch their programming careers and release them back to the local community.” Prashant, Head of Program added, “Our curriculum has always been evolving, one of the first ones in the industry to take the lead and empower the future of tech.

“We still have a lot of work to do but we’re super excited about the momentum we have going into the year 2021. We are absolutely thrilled about starting the new leg of growth both locally and internationally, excited to see what this year brings! Code has been an unparalleled force and a powerful tool from its inception. Technology has changed the world and now code fuels it. We take extreme pride in what we’ve been doing and are happy to be the torch-bearers of this in the country,” added Sadiya Sabera.

Over a period of 6 years,The Hacking School has evolved into this giant machine churning industry-ready developers. The right mix of diversity, long-standing experience, and technical expertise makes their community unique and so efficient. It’s sprouting to be the New age supplier of tech talent.