Nimo TV, a subsidiary of China’s leading live streaming platform HUYA, is helping its parent company expand its live streaming footprint across the globe. As the Chinese gaming industry has expanded abroad, HUYA has taken the lead in global game live streaming growth by launching the Nimo TV brand in Southeast Asia and Latin America since May 2018.

Nimo TV is now in 10 countries including Indonesia, Vietnam, Thailand, Mexico, and Brazil. As of December 2018, it has 11.5 million MAU (Monthly Active Users) and 20 million Android app downloads globally. With its official launch in Brazil, the platform will begin providing users with a more localized experience with quality live content from top regional influencers.

“We saw Brazil as a great opportunity to grow. Brazilians are among the most passionate gamers in the world. When we started testing in this market at the end of last year, we noticed the growing demand for game live streaming, mainly on mobile, where Nimo TV hopes to invest more,” says He Wei ,Vice President at HUYA Inc., and Head of Operations at Nimo TV. 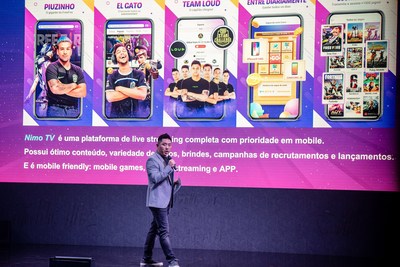 Nimo TV has secured exclusive content from some of the top influencers in the mobile games live streaming segment in Brazil, including Piuzinho, Elgato and Crusher. Closing the “gold quartet”, Bruno “PlayHard” Bittencourt has joined Nimo TV with an exclusive partnership.

“It’s very gratifying to side with a company that invest in the mobile gaming market. Today many people have a cell phone with internet access which makes it easier to be a creator and enjoy the best games like Free Fire,” said PlayHard, who has joined Nimo TV along with the LOUD team. Global expansion and successful localization will be a core competitive factor in the live streaming industry, bringing strategic value and growth. HUYA is looking to accelerate its overseas expansion and scale in 2019. Proceeds from HUYA’s recent follow-on public offering will also be partly used to support the company’s overseas business.

Microsoft announces 2019 Partner of the Year Award winners and finalists