Hisense to bring UEFA.tv to millions of fans by end of 2020 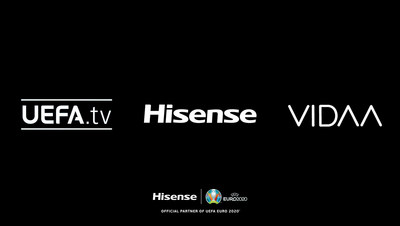 “Partnering with Hisense, a UEFA national team football official sponsor, to provide the UEFA.tv app on Hisense and Toshiba Smart TVs makes for a winning combination. UEFA is delighted to continue to bring incredible video content from our competitions to all fans and look forward to entertaining this new audience on the first smart TV platform to feature UEFA.tv.”

“I am delighted that Hisense is the first TV manufacturer to offer UEFA.tv on its televisions. Our mission is to bring the finest sports entertainment – both global and local – to fans at the touch of a button. Thousands of hours of great football matches and documentaries will now be available free of charge to Hisense and Toshiba smart TV owners all over the globe.”

They can also access the very best content from UEFA’s historic video archive in the form of classic clashes, legendary players and compelling football storytelling.

Throughout June and July UEFA.tv will be celebrating some of the greatest UEFA EURO moments with classic match re-runs, “On This Day” features, historic EURO goals, curated playlists and more.

When it comes to live content, fans will be able to tune-in to match streaming from UEFA’s youth, women’s and futsal competitions, as well as live coverage of key UEFA competition draws. *

Hisense customers can sign up to UEFA.tv for free using a simple registration process within the app, while existing UEFA digital account holders simply log-in with their usual credentials.

Hisense was founded in 1969 in Qingdao, China and for five decades has been committed to developing innovative consumer electronics products. Today, Hisense is a leading TV brand worldwide and a market leader in China, South Africa and Australia and also one of the largest manufacturers of white and brown goods, offering a complete home solution under one roof. The company has built 54 overseas companies and offices, and utilises 14 high-end international production facilities in China, Europe, Central America and South Africa. Hisense also has 18 research and development centres worldwide with the sole aim of delivering first-rate and affordable products that improve the lives of consumers.

VIDAA is a Linux based open smart TV operating system, currently used on Hisense TVs. Established in 2014, it has – in just six years – become a strong global contender in the smart TV platform space. In 2020, VIDAA is introducing a completely new and revamped user interface named 4.0, which puts users and their way of consuming content at the core of the design. VIDAA will be preinstalled on new Hisense TVs as well as Toshiba Smart TVs manufactured by Hisense.

UEFA – the Union of European Football Associations – is the governing body of European football. It is an association of associations, a representative democracy, and is the umbrella organisation for 55 national football associations across Europe.

Its objectives are, among other things, to deal with all questions relating to European football, to promote football in a spirit of unity, solidarity, peace, understanding and fair play, without any discrimination on the part of politics, race, religion, gender or any other reason, to safeguard the values of European football, promote and protect ethical standards and good governance in European football, maintain relations with all stakeholders involved in European football, and support and safeguard its member associations for the overall well-being of the European game.

OKEx Jumpstart to Launch Its 14th Token Sale with WaykiChain