BERLIN, Sept. 6, 2019 /PRNewswire/ — On Sept. 6th, IFA 2019 officially kicked off in Berlin. Hisense Group, the world’s leading home appliance enterprise, presented in an unprecedented scale with three major brands: Hisense, Gorenje and ASKO, and they became the focus of the exhibition. 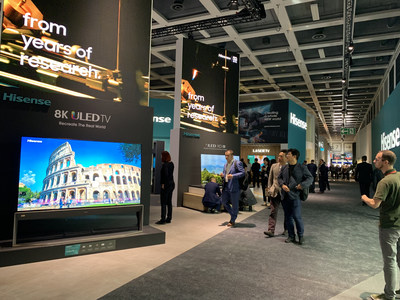 The technology-leading Hisense Laser TV, well designed Gorenje refrigerator with high-tech applications, and high-end ASKO kitchen appliances are on display at the exhibition. The innovative products of the three brands make Hisense one of the home appliance providers with the most complete categories.

Hisense’s outstanding performance in the European markets has always attracted much attention. Since 2006, Hisense has put forward the strategy of “brand globalization” and maintained a rapid development trend, with a compound annual growth rate of over 20%. The European market is a key area for Hisense’s strategic internationalization layout. After more than ten years of development, Hisense has formed a sales network centered on the German market and expanding to Spain, Italy, the UK, France and other markets. Hisense has also built its Europe R&D center and production base in order to localize products. From January to July 2019, the sales volume of Hisense brand in the European market increased by 19.4% YoY, and the growth in key markets such as Germany and the United Kingdom exceeded 20%.

Meanwhile, Hisense also accelerated its entry into the European market through mergers and acquisitions. In August 2018, Hisense officially completed the acquisition of European appliance giant Gorenje. With a high brand awareness, Gorenje is one of the leading manufacturers of high quality home appliances in Europe. Gorenje owns high-end brands such as ATAG and ASKO, and it has a production base in Europe. With Gorenje, Hisense has established full-scale products and a complete system containing research, production and sales, which accelerated its market development process.

Hisense’s brand awareness has increased significantly in Europe by sponsoring UEFA EURO 2016™ and 2018 FIFA World Cup™. Once again, Hisense is the official partner of UEFA EURO 2020™. As the competition approaches, Hisense is expected to show even stronger growth in Europe.