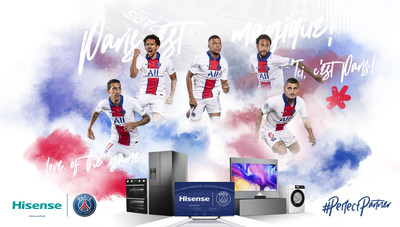 Hisense has been creating award winning home appliances and consumer electronics sold globally over the last 51 years. This new partnership will highlight Hisense’s mission to enhance the viewing experience for football fans around the world and will see them working alongside the club to showcase their range of products.

With ground-breaking technology in TV and home appliances, Hisense is perfectly positioned to enable the best home viewing experience for Paris Saint-Germain fans.  As well as seeing the Hisense brand and product range showcased to huge audiences in the Parc des Princes stadium and around the world, via broadcast, digital and social channels, the partnership will also see Hisense provide a wide range of innovative products to the club to support its needs across its various facilities, including its new training centre.

Alex Zhu, the president of Hisense International, said, “We are excited to team up with Paris Saint-Germain, one of the most successful and fastest growing clubs in the world. They have always pursued breakthroughs in technology and innovation in everything that they do, which coincides perfectly with Hisense’s mission of “pursuing scientific and technological innovation and bringing happiness to millions of families”. We believe that through this partnership, we can create the best possible at home viewing experience for Paris Saint-Germain and its fans throughout the world.”

Marc Armstrong, Chief Partnerships Officer at Paris Saint-Germain commented: “We are delighted to welcome Hisense to the Paris Saint-Germain family and to be partnering with such a world-leading consumer electronics and home appliances company. It will provide an excellent opportunity to reach and interact with our fans across the world via the creation of powerful experiences and opportunities and we look forward to helping Hisense achieve its global ambitions.”

Sébastien WASELS, Managing Director Asia Pacific at Paris Saint-Germain added, “We are proud to to be working with such a leading global brand from Asia Pacific. This is a meaningful partnership for the club, demonstrating our growing commitment to the region. We are looking forward to bringing the Paris Saint-Germain experience into more people’s homes around the world. Together with Hisense, we will also come closer to our fans in China where the Hisense headquarters are located.”

Today’s announcement builds on Hisense’s continued commitment to sport through sponsorship of major sporting properties around the globe, including the partnership with the 2018 FIFA World Cup, UEFA EURO 2016, Formula One Red Bull racing and Australia Open. The sponsorship celebrates Hisense’s presence on the world stage, with the products exported to over 160 countries and regions.

Paris Saint-Germain and Hisense have been at the forefront of innovation in recent years, with the two brands now working together to bring high quality entertainment into people’s homes.

Founded in 1969, Hisense is headquartered in Qingdao, China. In the past 51 years, Hisense has always adhered to the core values of “Integrity, Innovation, Customer Focus, and Sustainability”. The business covers areas including multimedia, home appliances, IT intelligent information and modern service industries. The company is a leading TV brand worldwide and a market leader in China, South Africa and Australia. Hisense has built 54 overseas companies and offices, and 14 high-end international production facilities in China, Europe, Central America and South Africa. Hisense also has 17 research and development centers worldwide with the sole aim of delivering first-rate and high-quality products that improve the lives of consumers.

Paris Saint-Germain football club was created in 1970. Since QSI’s purchase of the club in 2011, it has transformed to become one of the top football clubs and global sports brands in the world. -Paris Saint-Germain is connected with Paris, which is at the heart of the organization, under the philosophy of one unique city, one unique club. The club has since then won 18 trophies in only seven years, 43 in its history, becoming the most successful football club in France. Paris Saint-Germain has attracted many great players including Ronaldinho, Beckham, Ibrahimovic, and currently Neymar and Mbappé, both ranked amongst the top 4 players in the world. The international popularity of the club never stops growing. It is now the one of the most followed club in the world, expanding from zero to a community over 90 million social media followers in just seven years. It has opened international offices in Doha, New York and Singapore. The pioneering sports club which now includes men’s football, women’s football, handball and judo added esports in 2016. Giving back to the community is fundamental to the club who has drastically increased the capacity of its Foundation to develop large and efficient programs. Among numerous projects, the Red & Blue School project allows the Paris Saint-Germain to serve underprivileged youths.