“Christmas and New Year are when families come together to celebrate over good food, yet many tend to abandon their healthy eating and fitness goals during this time of year,” said Stephen Conchie, senior vice president and managing director, Herbalife Nutrition Asia Pacific. “We have uncovered some of the biggest challenges consumers face during the holidays, with the hope of helping them identify their own habits to be able to maintain their goals during the festive seasons.”

As a result of overeating and exercising less around the holidays, Asia Pacific consumers found themselves gaining an average of 3 kilograms in weight following the Christmas and New Year holidays. To lose the weight, over half (54 percent) of Asia Pacific consumers would eat more healthily and 46 percent would make an effort to exercise more once the festivities are over.

Despite the efforts, close to one in four (24 percent) Asia Pacific consumers did not manage to lose the weight they gained after the festive season, showing that maintaining healthy lifestyle habits throughout the festive season could be a better way to support long-term well-being.

To aid weight management during Christmas and the New Year, Herbalife Nutrition recommends: When comparing the holiday eating and exercise habits of consumers across Asia Pacific during Christmas: 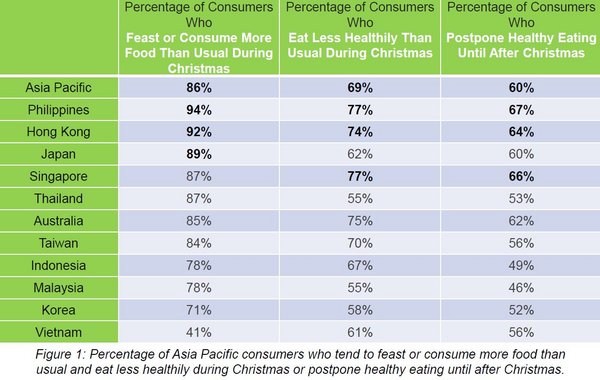 When it comes to celebrating the New Year: While consumers are eating more during Christmas and the New Year, close to half (49 percent) of Asia Pacific consumers said that they felt guilty for eating less healthily during the holidays.

When it comes to exercise, over three in five said that they tend to exercise less when Christmas and the New Year come around, while over half (56 percent) would postpone their exercise regime until after the holidays. Herbalife Nutrition is a global company that has been changing people’s lives with great nutrition products and a proven business opportunity for its independent members since 1980. The Company offers high-quality, science-backed products, sold in over 90 countries by entrepreneurial members  who provide one-on-one coaching and a supportive community that inspires their customers to embrace a healthier, more active lifestyle. Through the Company’s global campaign to eradicate hunger, Herbalife Nutrition is also committed to bringing nutrition and education to communities around the world.

The company also encourages investors to visit its investor relations website at ir.herbalife.com as financial and other information is updated and new information is posted.