NEW YORK, Sept. 6, 2019 /PRNewswire/ — Harry Potter and the Cursed Child, universally acclaimed for its breathtaking magic and stage wizardry, last night welcomed fans “Back to Hogwarts” with the launch of a new worldwide campaign in the heart of Times Square. 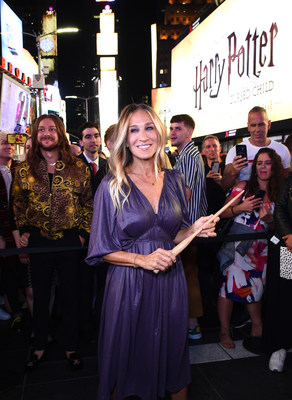 To mark the global milestone, the show hosted the largest-ever Times Square takeover, with award-winning actress and Harry Potter fan, Sarah Jessica Parker, as well as Wizarding World fans and influencers. Fans witnessed a jaw-dropping takeover of nearly all the Times Square screens, which revealed the never-before-seen Harry Potter and the Cursed Child campaign, in celebration of its global expansion.

With more than two million tickets sold worldwide, Harry Potter and the Cursed Child has been spreading its magic and thrilling audiences across the globe in London, New York and Melbourne, with more productions opening soon in San Francisco, Hamburg and Toronto.

“We are very proud that J.K. Rowling chose to tell her eighth story on stage. Just as she created a generation of lifelong readers with the Harry Potter book series, Harry Potter and the Cursed Child is now doing the same for theatre, with over half of our audiences worldwide being first time theatre-goers of all ages,” said Sonia Friedman and Colin Callender, producers of Harry Potter and the Cursed Child. “Three years in and over two million tickets sold thus far, it is so exciting to watch audiences all over the world be transported ‘Back to Hogwarts’ to revisit their beloved characters. There is nothing like the experience of being in a theatre with a community of others, seeing and experiencing in real-time as the magic unfolds live before your eyes. The Boy Who Lived, lives on, and the story continues on stage across the world because, as J.K. Rowling herself said: ‘Sometimes, darkness comes from unexpected places.'”

As a special thank you to Harry Potter fans, and as a nod to the famous platform nine and three-quarters at King’s Cross Station, Harry Potter and the Cursed Child is announcing that 934 lucky people around the world will get the chance to watch the show as complimentary guests. But fans have to act fast. To find out how you might become one of them, go to www.harrypotteronstage.com now and select your chosen location.

“Harry Potter has such a special place in my heart and seeing the characters from the stories come to life on stage was true magic for me,” said actress Sarah Jessica Parker. “From the astounding stagecraft, to the magic and illusions, Harry Potter and the Cursed Child brings true storytelling to life that keeps you on the edge of your seat. Being part of the whole experience tonight was one that I’ll never forget.”

Harry’s story continues on stage, where the magic is real. To be part of it, go to www.harrypotteronstage.com.

About Harry Potter and the Cursed Child
Receiving universal acclaim for its breathtaking magic and stage wizardry, Harry Potter and the Cursed Child is the most awarded play in theatre history, winning 25 major U.S. awards, including six Tony Awards with one for Best Play and 24 major theatre awards in the U.K. being the most awarded show in the history of Britain’s Olivier Awards, winning a record-breaking nine awards including Best New Play.

Harry Potter and the Cursed Child is now playing at the Palace Theatre in London, where it received its world premiere in July 2016; at the Lyric Theatre in New York, where it opened on Broadway in April 2018; and at the Princess Theatre in Melbourne, where it opened earlier this year. Upcoming productions include the exclusive U.S. West Coast premiere in San Francisco at the Curran later this year; the German premiere, the first non-English language production, at the Mehr! Theater am Großmarkt in Hamburg in spring of 2020; and the Canadian premiere at the Ed Mirvish Theatre in Toronto in fall of 2020. 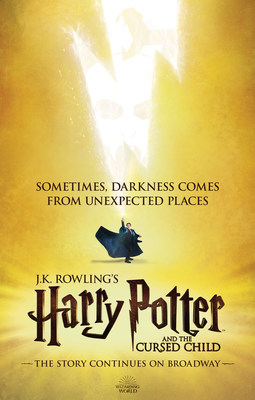