HarperCollins India is proud to announce the release of STRATEGIC CHALLENGES India in 2030, Edited by Jayadeva Ranade 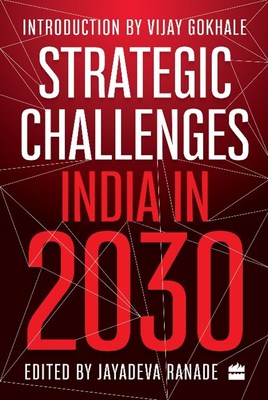 In the shifting sands of contemporary geopolitics, this edited volume puts the spotlight firmly on urgent strategic challenges India is likely to face by the year 2030.

Already, major powers like China and Russia are adopting muscular policies with the intent of changing the global order. This includes attempts to take territories—claimed by them on the basis of, at times, imagined history—through the use of military force. The US and the West are struggling to retain their pre-eminence, while emerging powers in the Indo-Pacific are demanding representation at the global high table. Each player is seeking to shape events to their advantage.

As alliances are altered, India finds itself in a position that calls for dexterous, nimble and bold policies. India is also presented with an opportunity to wield influence that would place it in an advantageous geopolitical position

Strategic Challenges aims to form a fuller picture of the situation by examining the various pieces that make up this dynamic kaleidoscope, with chapters authored by India’s leading thinkers, analysts and strategists.

Beginning with an introduction by the former foreign secretary, Vijay Gokhale, the topics the book tackles include the volatility of India’s neighbourhood, its hesitant embrace of the US, implications of Russia’s warming ties with China, modern military technology on land, sea and air, and the challenges of artificial intelligence, among others.

“Amid rising tensions in the region as India negotiates risky shoals, the book ‘Strategic Challenges: India 2030′  provides expert insights into the difficulties and opportunities confronting India. It includes discussion of possible actions by major powers that could impact India,” says Jayadeva Ranade (editor of the book)

“In a quick-shifting geopolitical scenario, a host of challenges face India as it navigates the second decade of the twenty-first century. In Strategic Challenges, expert analysts not only weigh in on current challenges but also ones that are likely to crop up as we near 2030. With contributors like Vijay Gokhale, Vikram Sood, Arun K. Singh, Air Marshal Raghunath Nambiar, Vice Admiral Shekhar Sinha, Kiran Karnik, and others, this book is essential reading for all those who are concerned with India’s strategic preparedness in a rapidly altering world,” says Swati Chopra, Associate Publisher, HarperCollins India.

Jayadeva Ranade, a former additional secretary, Research and Analysis Wing, is a security and intelligence expert. He is a seasoned China analyst with over forty-five years of experience in the field and has studied Chinese at the Jawaharlal Nehru University, New Delhi and Hongkong University.

His foreign assignments have included Hong Kong, Beijing and his last foreign posting, prior to retirement in late 2008, was as minister in the Indian Embassy in Washington. Ranade was a member of the National Security Advisory Board and is presently president of the Centre for China Analysis and Strategy and a distinguished fellow with the Centre for Air Power Studies. He frequently contributes articles on China to many national newspapers, magazines and publications.

HarperCollins India publishes some of the finest writers from the Indian Subcontinent and around the world, publishing approximately 200 new books every year, with a print and digital catalogue of more than 2,000 titles across 10 imprints. Its authors have won almost every major literary award including the Man Booker Prize, JCB Prize, DSC Prize, New India Foundation Award, Atta Galatta Prize, Shakti Bhatt Prize, Gourmand Cookbook Award, Publishing Next Award, Tata Literature Live! Award, Gaja Capital Business Book Prize, BICW Award, Sushila Devi Award, Sahitya Akademi Award and Crossword Book Award. HarperCollins India also represents some of the finest publishers in the world including Harvard University Press, Gallup Press, Oneworld, Bonnier Zaffre, Usborne, Dover and Lonely Planet. HarperCollins India is now the recipient of five Publisher of the Year Awards – In 2021 and 2015 at the Publishing Next Industry Awards, and in 2021, 2018 and 2016 at Tata Literature Live. HarperCollins India is a subsidiary of HarperCollins Publishers.