BENGALURU, Jan. 30, 2020 /PRNewswire/ — Star Air, a promising airline company that has had remarkable success in its first year of operations, continues to make good strides in the aviation industry. It has recently announced something which thousands of travellers were demanding for quite some time. The airline on growing public demand has decided to increase its operations on multiple air travel routes. 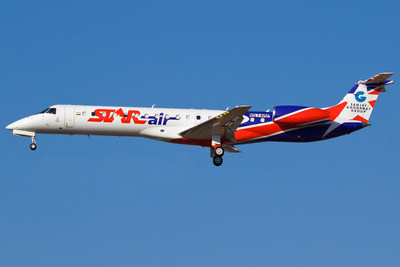 There had been a long-standing demand to start flight services connecting Kalaburagi – Bengaluru, and Hubballi – Hindon (Delhi). People of these regions had to travel with hassle and discomfort while moving between these cities. Their travel inconvenience problem is solved by Star Air by commencing its services on these routes for the first time in history. Since the launch of its flight services, the airline has been receiving a phenomenal response from its customers. And now to fulfil the growing demand, Star Air has now decided to increase its operating frequency on these two routes.

The airline operates under the RCS-UDAN scheme and is quite popular among travellers for its services. Whether it is about on-time departure, on-time arrival, food quality, ticket rates, comfort or safety, Star Air takes care of everything quite brilliantly keeping its passengers’ concerns in mind and thus shines at most of the aspects that any traveller looks for. Moreover, Bengaluru and Hindon (Delhi) are the two fastest-growing cities in India that attracts thousands of tourists, entrepreneurs, students, and others towards them every season. The number of people travelling to these cities have also risen quite astonishingly in recent times. Many aviation experts say that these could be some of the popular reasons why travellers choose to fly with Star Air and thus inspired the airline to make this expansion move.

Star Air now provides its services to nine Indian cities including Mumbai, Bengaluru, Ahmedabad, Tirupati, Hubballi, Belagavi, Delhi (Hindon), Kalaburagi and to the latest addition Indore. Anyone can book its tickets by visiting starair.in, MakeMyTrip, Goibibo, via.com or riya.com. Tickets are available at a very discounted rates Rs. 2,599 and Rs. 3,699 only for Kalaburagi – Bengaluru, and Hubballi – Hindon sector respectively.

Below is the updated schedule for Bengaluru – Kalaburagi sector:

Below is the updated schedule for Hubballi – Hindon sector:

Sanjay Ghodawat Group is an influential Indian business conglomerate that has its presence across various high-value business verticals ranging from salt to software, having its headquarters near Kolhapur, Maharashtra. Agriculture, Aviation, Consumer Goods, Energy, Floriculture, Food Processing, Mining, Realty, Software, Textiles, and Education are some of its key business domains. The group was incepted in 1993 and since then it has flourished exponentially in the last 25 years under the splendid stewardship of its Founder and Chairman – Mr. Sanjay Ghodawat. It employs 10,000 people globally.