Grandview Lights the Future with an Asteroid

GUANGZHOU,China, Sept. 9, 2022 /PRNewswire/ — On September 8, 2022, asteroid No.29438 was officially named “29438 Zhengjia (1997 MV)”, the phonetic spelling of Grandview in Chinese, and the opening ceremony of Grandview Museum of Science and Grandview Museum of Astronomy was held at Guangzhou Marriott Hotel. This is the first asteroid named after an enterprise engaging in public education by the International Astronomical Union (IAU), which represents not only the recognition and affirmation on the Grandview Group’s contribution to citizens’ science education by international and domestic scientific and educational societies, but also the expectation and encouragement for the future development of astronomy research and popular science education in the Guangdong-Hong Kong-Macau Greater Bay Area. The opening ceremony also announced the official opening of Grandview Museum of Science and Grandview Museum of Astronomy, two new members of the “Grandview Planet”.

On June 26, 1997, an asteroid was detected and recorded at Xinglong Observatory of National Astronomical Observatories (NAOC). This year, with the approval of the WG Small Bodies Nomenclature, this asteroid was officially named “29438 Zhengjia (1997 MV)”. Chen Jiansheng, astrophysicist and academician of University of Chinese Academy of Sciences, presented the certificate of asteroid naming to Grandview Group. “The naming of 29438 Zhengjia (1997 MV) is a gift from the NAOC and the IAU to Grandview Group, which is committed to promoting the development of astronomical science popularization and research education in the form of public welfare venues,” said Academician Chang Jin, Director of the NAOC, at the event. 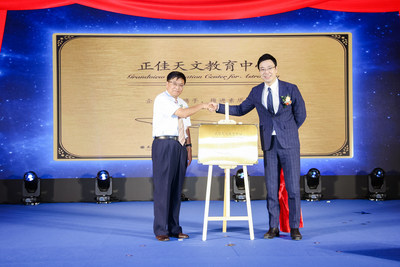 Max Xie, Vice Chairman and CEO of Grandview Group Co., Ltd., said at the ceremony, “Imagination is the gene engraved in our bones. As a trendy landmark in Guangzhou, Grandview Mall has been committed to creating imaginative new-type businesses, integrating culture, creativity and dreams into different formats, and creating more joy and happiness for the public.”

On the same day, two museums were officially opened. Grandview Museum of Science, with an area of 10, 000㎡, is China’s first theme science museum built in accordance with the standards of world-class science museums. It presents the visitors with a series of interesting exhibits, including world’s largest Coriolis turntable, the world’s first Madeburg hemisphere experience, the reproduced classic scientific experiment of Leaning Tower of Pisa and the “descendants” of the apple tree that hit Newton in history, and so on.

The Grandview Museum of Astronomy brings the audience into a magnificent world where myth, science, stories and history coexist! You can lie on the grass, look up at the starry sky; you can experience the shock of reaching out to pick stars with the supernovae erupting overhead! 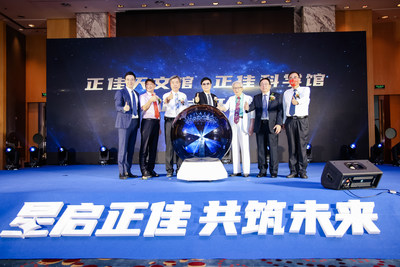 As an important place to protect and inherit human civilization, museums are one of the important ways to help people learn science. The naming of 29438 Zhengjia (1997 MV) and the brand-new appearance of the two museums will facilitate Grandview Mall to be built into the most complete science education base in the Guangdong-Hong Kong-Macao Greater Bay Area, with the most complete fields, the most diverse types as well as the richest content.