NEW YORK, Aug. 19, 2020 /PRNewswire/ — Grammy winner Ariana Grande, invites you to an out of this world experience with her dreamy new fragrance R.E.M. This highly anticipated new fragrance, in partnership with LUXE Brands, will launch exclusively on Ulta.com August 19, 2020 and in stores nationwide at Ulta Beauty in the United States on September 6, 2020. 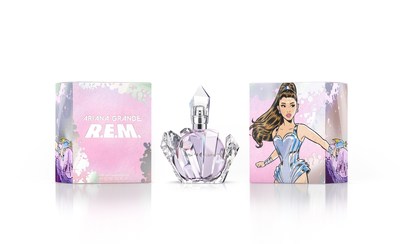 Grande’s global success in fragrance has been unprecedented with sales upwards of $500 Million since launch.  The award winning franchise boasts nominations for Fragrance of the Year, Media Campaign of the Year and Consumer Choice with the launch of “Thank U Next” in 2019 and the exciting win for Fragrance of the Year for Cloud. “The continued success and stellar growth of Ariana’s fragrance portfolio is a testament to her relationship with her fans and the passion and authentic involvement she has with her brand.  We are honored to again be partnering with such a groundbreaking artist and look forward to continued success with the launch of R.E.M.,” says Tony Bajaj, Chief Executive Officer of LUXE Brands.

Says Grande, “The R.E.M. fragrance has quickly become a favorite of mine. So much so that I named it after one of my favorite songs and paired it with one of my favorite visual worlds which is that 60s mod, space, dream world. I wish I could live in that world forever and wear this scent while I’m there and just have it blasting out of my spaceship at all times to combat any potential bad vibes. This scent feels warmer, sexier, more grown and kind of grounded more so than the others but the secret ingredient that gives it that sweetness and ties it in with the rest of the family is caramel! I am very excited about this and I hope everyone loves it as much as I do.”

“Ariana is the creative visionary behind the animated, fantasy world of R.E.M. and has partnered with award winning package designer Joshua English on the bottle design, Oscar nominated director Olivier Lescot and illustrator Cheyne Gallarde to create the R.E.M. universe.  Ariana transforms into a strong, feminine heroine fighting to save the world and inviting her fans to share in the journey,” explains Noreen Dodge, Chief Marketing Officer of LUXE Brands.  The R.E.M. narrative is optimistic, empowering and synergistic with the values Ariana imbues.

The campaign is a first for the category with its dramatic animation and visual delight for fans as Ariana, Toulouse, Piggy Smalls and other special guests conquer the galaxy. “I am excited to collaborate with an artist as talented as Ariana Grande on this animated tribute to sci-fi from the 70’s to today. I am inspired by science fiction in my visual work and delighted to have the chance to draw upon its rich iconography to bring to life the irresistible pop of Ariana,” says Lescot.

THE FRAGRANCE:
The beautifully crafted R.E.M. fragrance was developed with Firmenich and expands the Ariana Grande fragrance universe. A creation that draws you in with an inviting blend of Pear, Fig and warm, salted caramel.  Lavender essence, intoxicating musks and cashmere like Tonka and sandalwood create the perfect trail on this unforgettable journey.

THE PACKAGING
The delicate lavender colored bottle with shiny silver logo emblem and crystal cap ascending to the heavens contains the out of this world fragrance. This intergalactic elixir is encased in an amazing clear crystal based with complex facets that reflect a show so inspiring it can only be seen in the cosmos. The story continues to unfold with the comic inspired secondary carton. Watch as Ariana protects this amazing new fragrance across the galaxy and beyond…..where dreams are reality.

All prices are manufacturer’s suggested retail prices in US dollars.

The R.E.M. fragrance from Ariana Grande will be available online at Ulta.com August 19, 2020 and in Ulta Beauty stores nationwide September 6, 2020 and will roll out globally with key global retail partners Douglas, Boots and Liverpool.

ABOUT ARIANA GRANDE
Grammy winning, multi-platinum recording artist and international superstar, Ariana Grande, is the first artist to hold the top three Billboard Hot 100 spots since The Beatles in 1964 with “7 Rings,” “Break Up With Your Girlfriend, I’m Bored,” and “Thank U, Next.”  At age 27, she has delivered five platinum-selling albums and surpassed 35 billion streams – she’s Spotify’s most streamed female artist of the past decade – while rapidly becoming one of the biggest pop stars of our generation with her powerhouse vocals and unmatched presence both on stage and with her fans. In 2019, Grande embarked on the Sweetener World Tour and performed over 100 shows throughout the year, including headliner sets at Lollapalooza and Coachella – where she was the youngest headliner in the festival’s history. In 2020, Grande debuted atop the Billboard Hot 100 with “Stuck with U” (with Justin Bieber) and “Rain On Me” (with Lady Gaga), making Ariana the first and only artist to have 4 singles debut at #1 in the chart’s history.

At 15 years old, she landed the role of “Charlotte” in the Broadway production of 13. From there, she was cast in Nickelodeon’s Victorious which led to a spin-off starring Grande’s character in Sam & Cat. Other television credits include voice work in Family Guy, Winx Club and Underdogs with on-camera roles in Ryan Murphy’s Scream Queens and a guest role in Jim Carrey’s Kidding. In 2016, Grande starred as “Penny Pingleton” in Hairspray Live! for NBC. That same year she performed double duty as host and musical guest on Saturday Night Live.

ABOUT LUXE BRANDS
LUXE Brands, Inc. is a global, prestige beauty company dedicated to developing world-class beauty brands that inspire consumers around the world. The company’s innovative approach to design, marketing and building-brands with a digital first ethos has earned numerous awards around the world. LUXE Brands was awarded Fragrance of the Year in 2019 on behalf of Cloud by Ariana Grande. The full portfolio includes Ariana Grande, Nicki Minaj, Eau de Juice by Cosmopolitan and Jennifer Lopez.