In a Bollywood first, Malang movie makers use GoPro to capture and immerse viewers in its upcoming adrenaline-fueled romantic thriller 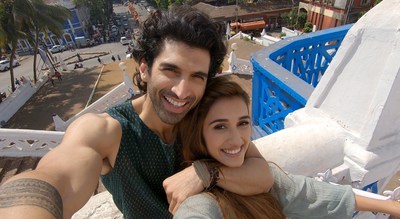 HERO7 Black was used to capture the film’s endearing love moments to the crazy adventurous outings, like kite surfing in picturesque waters or cruising on scooters, all of which skillfully characterizes the chemistry between lead actors Aditya Roy Kapur and Disha Patani. The rugged, waterproof design paired with HyperSmooth stabilization delivers cinematic footage that brings the action and adventure to life as the film travels across iconic destinations in Goa and Mauritius.

Director Mohit Suri says, “Malang is as much about fun, travel and adventure as it is about action, romance and intense drama. We have managed to capture a lot of this adventure and excitement using the GoPro cameras. A versatile camera like this lets us get up close and personal with the action happening and almost makes the viewer feel like they’re a part of all the fun. I’m sure the audience will love this unique perspective which we were able to get by using GoPro cameras.”

Outside of the adrenaline-fueled moments, Aditya Roy Kapur’s character is also shown documenting his life experiences on a GoPro.

“GoPro enables people to capture and share their passion,” says Todd Ballard, Chief Marketing Officer for GoPro. “Our cameras not only let you capture extreme outdoor and sports activities but also are capable of recording more personal, travel experiences and simple daily life adventures. A GoPro camera goes places where a smartphone or DSLR can’t. It is amazing to see that our pocket-sized 4K camera footage has made its way into a leading Bollywood-grade movie production. Malang is raising the bar of unique content for next-gen Indian movies.”

GoPro helps the world celebrate and share itself in immersive and exciting ways. GoPro, HERO, and their respective logos are trademarks or registered trademarks of GoPro, Inc. in the United States and other countries. All other trademarks are the property of their respective owners. For more information, visit www.gopro.com. GoPro users can submit their photos, raw clips and video edits to GoPro Awards for social stoke, GoPro gear and cash prizes. Learn more at www.gopro.com/awards. Connect with GoPro on Facebook, Instagram, LinkedIn, Pinterest, Twitter, YouTube, and GoPro’s blog The Inside Line.

Luv Films, founded in 2012, is a film production house established by Writer-Director Luv Ranjan and his childhood friend Ankur Garg. The company is focused towards production and distribution of creative content for the silver screen experience. In a short span of time, Luv Films has delivered films such as Sonu Ke Titu Ki Sweety, De De Pyaar De and Jai Mummy Di. Their upcoming films are with some of the most renowned and successful talent from the Hindi film industry, which also includes the Mohit Suri directed Malang starring Aditya Roy Kapur, Disha Patani, Anil Kapoor and Kunal Kemmu releasing worldwide on February 7, 2020.