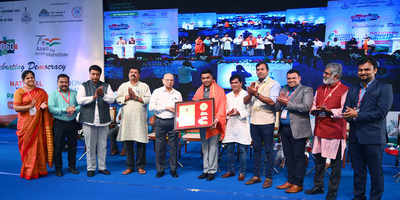 The National Panchayat Parliament witnessed invigorating sessions on creation of Gram-Swaraj through model villages, which advocate holistic development and self-sufficiency to the maximum. It highlighted the need for people’s participation in planning and execution for the sustenance of model villages. It also stressed on how leadership at the grassroots level can have a transformative impact on people and ensure higher participation in democratic processes.

Shri Pramod Sawant, Hon’ble Chief Minister of Goa said, “I appeal to all the elected members of Zilla Panchayats present at the National Panchayat Parliament to ensure that all the ward and block level schemes of the government are reaching to the last mile beneficiary. Our Swayampurna Goa Initiative has received an overwhelming response from the people. We have implemented its 10 point programme in urban and rural areas through which electricity, water and other basic facilities were given to all. We appreciate the efforts put in by Panchayats and Zila Panchayat members in delivering self-less service to people during the pandemic and cyclone.”

Shri. Chandrakant Kavlekar, Hon’ble Deputy Chief Minister of Goa, said, “I appreciate the efforts made by Chief Minister Dr. Pramod Sawant and MIT School of Government for organising these momentous conclaves of National Women Parliament, National Youth Parliament and National Panchayat Parliament at such a large scale. These are the three important pillars of our democracy and coming together of these will further strengthen it.”

Shri. Rajesh Patnekar, Hon’ble Speaker, Goa Legislative Assembly, said, “The last five days at the Goa at 60 event is nothing short of historic. We have witnessed a very fruitful exchange of ideas, which would be used for the betterment of society and country at large.”

Shri. Rahul V. Karad, Managing Trustee & Executive President, MAEER’s MIT and Executive President, MIT World Peace University & Chief Initiator, MIT School of Government, highlighted the role of youth participation in democracy, and said, “Earlier we used to organize such Parliaments in different states of the country where we received an overwhelming response. However, this event organised by the Goa Legislative Assembly is nothing short of historic. The government through this initiative is working towards giving a great message to the world. Through this Parliament, the incredible work done by the leadership at the grassroots level will be presented to the entire country.”

The National Panchayat Parliament came to a close with a valedictory ceremony graced by the presence of special guest of honor Gen (Retd) J.J. Singh, PVSM, AVSM, VSM, ADC, Former Governor of Arunachal Pradesh and 22nd Chief of the Army Staff (COAS) of the Indian Army.

About MIT School of Government (MIT-SOG):

The MIT School of Government (MIT-SOG), a constituent unit of MIT World Peace University (MIT-WPU), Pune, is the first institute of its kind to initiate a two-year Master’s degree program in Political Leadership & Government or MPG (UGC-approved program) for a Career in Politics.

MIT-SOG was initiated in the year 2005 under the visionary leadership of Shri. Rahul V. Karad – Initiator & Executive President, MIT World Peace University with the vision of creating Ethical, Spirited,  and Committed Political Leadership for the country from the grassroots and from all walks of life.

Under the able guidance of Late. Shri. T.N Seshan, First Chairman, MIT-SOG, former Chief-Election Commissioner of India (also well known as the Father of Electoral Reforms in India), the curriculum for MPG program at MIT-SOG was designed with the complete involvement of highly decorated officials from Government, Politics, Judiciary, Media and Academia. MIT-SOG specifically caters to the need for training students in politics & government in order to become trained Political Leaders of the country.

Smt Chhavi Rajawat, Former Sarpanch, Soda Village, Rajasthan, said, “We have developed as a nation through means of technology but even today our villages are stuck in medievalism. Development should not be restricted to urban areas but should take into consideration rural areas as well. This will lead to holistic development of the country. For rural development, it is paramount to connect with the masses who make us aware of the actual challenges they face on ground. Without understanding of these ground level challenges, it will be difficult to holistically develop sustainable villages.”

Shri Pratapsingh Rane, MLA, Poriem Constituency, said, “In a federal democracy like ours, there is a great division of power, from grassroot to top, gram panchayat at village level and gram samiti at taluka level and our panchayats play a great role at ensuring democracy at grass root level by increasing participation of masses.”

Shri Pathandeep Singh, Sarpanch, Chhina Village, Gurdaspur, Punjab, said, “If we talk about SDG Goals, infrastructure development is one the goals. As a Sarpanch, I was determined to make sure that my village gets all the basic facilities and I prioritized infrastructure development for my village followed by education and women empowerment. We empowered women by making them actively participate in decision making at panchayat level.”