– The virtual B20 Summit was attended by more than 8,000 participants across the globe, with over three million viewers on social media throughout the two-day event

RIYADH, Saudi Arabia, Oct. 27, 2020 /PRNewswire/ — The Business Twenty (B20) Saudi Arabia, the official voice of the private sector to the G20, concluded today the B20 Summit, under the theme ‘Transforming for Inclusive Growth’, bringing together global leaders to issue a call to action to the G20 as countries deal with the impact of the COVID-19 pandemic. 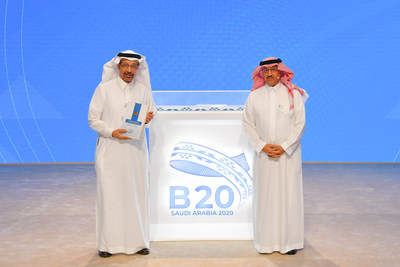 With the aim to reinvigorate the global economy and build the foundation for a more equitable world, the B20 officially delivered at the event its set of 25 policy recommendations to the G20, represented by, on behalf of the Custodian of the Two Holy Mosques King Salman Bin Abulaziz Al Saud, the Saudi Minister of Investment, His Excellency Khalid Abdulaziz Al-Falih.

“This year was like no other in B20 history due to the coronavirus pandemic. However, the priorities we identified before the outbreak, including trade and finance, digitalization, labor, climate and compliance, are every bit as important today,” said Yousef Al-Benyan, Chair, B20 Saudi Arabia. “The crisis reinforced the importance of solving these issues through inclusive policymaking while underscoring the need for a coordinated international effort that supports the most vulnerable including MSMEs and women, and the Sustainable Development Goals. I urge the G20 Leaders to adopt these critical policy recommendations to advance an inclusive and sustainable agenda that creates a legacy for 2020 and beyond.”

The G20 representative on behalf of the Custodian of the Two Holy Mosques King Salman Bin Abulaziz Al Saud, the Saudi Minister of Investment, His Excellency Khalid Abdulaziz Al-Falih, said: “I would like to congratulate the leadership of the B20 and its members, especially for your proactive recommendations in light of the expectations of a second wave of the pandemic and the attention you have paid in the most pressing issues in the global economy.”

The topics covered in the discussions and speakers on day 1 were as follows:

On day 2, the agenda and speakers were as follows:

With the completion of the B20 Summit, the group will continue to advocate for its bold, action-oriented policy recommendations ahead of the G20 Leaders’ Summit in November, and plan for the official handover to the next host country, Italy.

About B20
The Business Twenty (B20) is the official G20 dialogue with the business community. As the voice of the private sector to the G20, it represents the global business community across all G20 members and all economic sectors. Formed in 2010, it is the first engagement group of the G20.

The B20 supports the G20 through specific policy recommendations, the consolidated representation of business interests and economic expertise. It also fosters dialogue between the public and private sector.

Restoring Growth via Tourism at the 'Future Hospitality Summit'