NEW DELHI, Oct. 1, 2019 /PRNewswire/ — On the occasion of the 150th Birthday of Mahatma Gandhi, the Gandhi Global Family awarded the prestigious Gandhi Seva Medal to Ms. Heidi Kuhn, Founder/CEO, Roots of Peace, a humanitarian non-profit transforming minefields to vineyards and orchards worldwide. The event was held at the National Gandhi Museum, as the award is presented to individuals to recognize the outstanding services provided to impoverished communities worldwide. Past recipients include the Dalai Lama and other global leaders. Ms. Kuhn accepted the award with a young girl, Zahra, age 10, on behalf of the children of Afghanistan who seek a future without war. 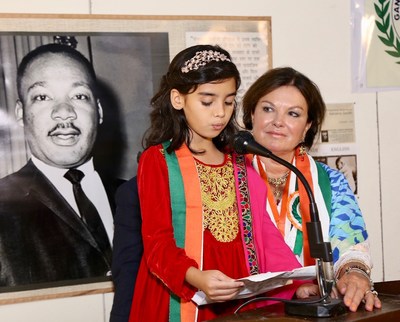 Mahatma Gandhi was an Indian lawyer and political ethicist who employed non-violence to lead the successful campaign for India’s independence from British rule, and in turn inspired movements for civil rights and freedom acts around the world. “Through Mahatma Gandhi’s footsteps for peace, he deeply inspired Dr. Martin Luther King, President John F. Kennedy, Nelson Mandela, and this is why we are acknowledging global visionaries like Heidi Kuhn who courageously give their voices to peace,” stated Dr. S.P. Varma, Gandhi Global Family.

As the recent Afghan Presidential Elections have resulted in uncertainty with only 20% voter turn-out, and while peace talks and peace treaties seem to dissipate–the Roots of Peace is alive and well in Afghanistan.

Since 2003, Roots of Peace has partnered with USAID, USDA, DOD, EU, ADB, GTZ and the World Bank to plant over 5 million fruit trees in all 34 provinces of Afghanistan resulting impacting over 1 million farmers and families. Afghanistan remains the most heavily mined countries in the world. Yet as landmines are removed, the land is no longer held hostage by explosive remnants of war in a country which is 80% dependent upon agribusiness. For nearly two decades, Kuhn has proudly worked with the Afghan farmers and families to help cultivate a harvest of hope by providing exports of fresh fruits to new markets, and Afghan exports are on target to reach over $1 billion by the end of 2019.

This week, Roots of Peace organized over 130 Afghan traders to meet with hundreds of Indian buyers at the Indian-Afghanistan Investment and Trade Show funded by USAID. In two days, over $40 million in trade deals was secured as fresh fruits, nuts and spices were exported from Afghanistan to major supermarkets in India such as Spar, Foodhall, Reliance and Big Bazaar resulting in sustainable peace.

“I am deeply humbled and honored to receive this prestigious award on the 150th birthday of Mahatma Gandhi, as it is a time in human history to take bold footsteps for peace,” stated Heidi Kuhn.  “As we remove landmines and plant grapevines we are literally turning MINES TO VINES and swords into plowshares for global families living on war-torn lands.  Together, we are planting the Roots of Peace on Earth.”

Kuhn has been invited to attend the Interfaith ceremony at Rajghat, the sacred burial site of Mahatma Gandhi, on October 2, 2019 at 7:30am at Gandhi Samadi, Rajghat, New Delhi, India. 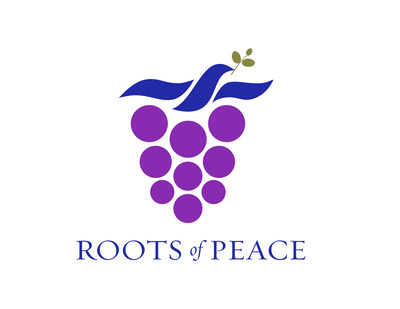