From Myanmar to the Middle East, from Vienna to Nigeria, Support Pours in for KAICIID After Austrian Vote

VIENNA, June 14, 2019 /PRNewswire/ — Following a motion passed on Wednesday in Parliament seeking Austria’s withdrawal from the International Dialogue Centre (KAICIID)’s Council of Parties, messages of support for the Centre have poured in from all areas of its operations across the world. 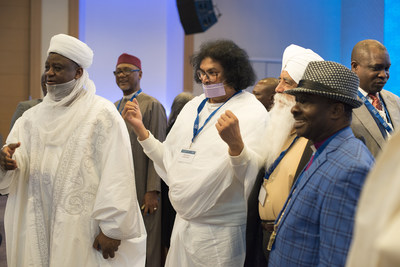 KAICIID’s Board of Directors, comprised of high-level representatives of the world religions, criticised the move, saying it “jeopardised” the Centre’s work in interreligious dialogue in some of the most troubled regions of the globe.

Senior religious leaders involved with KAICIID’s programmes echoed the Board’s concerns:  His Eminence Shawki Allam, Grand Mufti of Egypt, said “I strongly hope and pray the Centre will continue its blessed work to promote God’s will of love, respect and cooperation among all of us.”

In Central African Republic, Cardinal Dieudonné Nzapalainga and Imam Oumar Kobine Layama said KAICIID’s work “had a major impact in supporting a resolution of the Central African crisis and has facilitated tolerance, the process of the return of displaced persons, peace, and the principle of living together in CAR.”

In Myanmar, the Peaceful Myanmar Initiative, a KAICIID-supported platform of Muslim and Buddhist religious leaders, issued a statement saying in part “as a result of our close collaboration over the past 3 years, we have built an extensive network of interfaith dialogue champions, launched an IRD Training Centre, and reached over 3000 individuals.”

In Nigeria, Rev. Dr. Samson Olasupo Ayokunle, President of the Christian Association of Nigeria, said: “We commend KAICIID for their unrelenting commitment to peacebuilding all over the world. Its relevance has become more and more visible.”

Fellows from all over the world that have been participants in one of KAICIID’s flagship training programmes, also commended its work.  Rabbi Alexander Goldberg, Chair, Coordinating Council of Jewish Organisations at the United Nations, said: “KAICIID is a place to engage on human rights, gender equality, rule of law and religious freedom. It is essential in the dialogue between the Western and Arab world.”

Ahmad Alhendawi, Secretary General of the World Organization of the Scout Movement, praised KAICIID’s programmes, saying: “We are convinced that our partnership with KAICIID has added value to our work in promoting dialogue and building better understanding among young people.”

In KAICIID’s home town, Vienna, local religious leaders joined in praising the Centre. The Reverend Canon Patrick Curran, Chaplain of Christ Church, spoke highly of the influence of KAICIID training programmes. “In times of crisis, these religious leaders contribute to be able to bring peace through relationships….In times of stability, they contribute to a better understanding of difference.”

Tarafa Baghajati, Chairman, Initiative of Austrian Muslims said: “KAICIID does a good job… and has sustainable projects. KAICIID supports, for example, the Jewish-Muslim Leadership Council (MJLC). It has also initiated refugee integration programmes and has sponsored and supported a number of peace initiatives in trouble spots around the world. Who will take over this job?”

Nearly Half of Indian Fathers are Under Work Stress, Taking a Toll on Their Health: FGILI Study