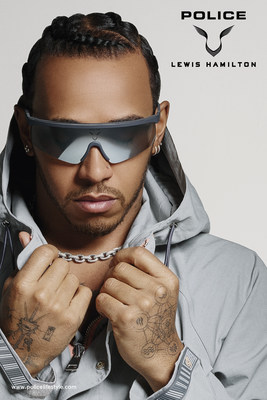 Uniting the worlds of fashion and racing, the collaboration between Police and the F1™ legend has created a spectacular collection of eyewear that epitomises the concept of speed and design. Comprising 7 sunglasses and 3 prescription glasses, each piece combines the pilot style and Police spirit with strong, iconic design that brings together classical, retro-inspired shapes with fashion-forward trends. Sustainability and function sit at the heart of the collection, which uses materials such as bio-acetate, titanium and rubber, picked for their efficiency.

“Working with Police on the creation of this collection has been an amazing experience. On and off the track I’m always looking to challenge myself and fulfil my potential in new ways, so I’ve loved the design process and have learnt so much from working alongside Police’s brilliant creative team. From developing the collection and understanding the intricacies of eyewear design, to picking the materials and customisation of the final product it’s been such a rewarding experience. Together we’ve pushed every boundary so I’m extremely proud to finally get to share the Police x Lewis Hamilton Collection with the world,” says Lewis Hamilton.

“A true icon of F1™ and of the fashion world, Lewis Hamilton uses eyeglasses as one of his distinguishing style accessories. He was so keen to learn and brought his own unique and iconic style to the design process,” adds Enrico Furlan, Creative Director of De Rigo Vision. “This collection bears not just his signature, but also – and above all – his unmistakable style and values, which perfectly reflect the style and essence of Police. It was inspiring to see his attention to detail and his sensitivity towards an issue as important as sustainability”.

In addition to developing the collection with Lewis Hamilton, Police is also an official team supplier of Mercedes-AMG Petronas Motorsport. Through this relationship the drivers and their fellow team members have been enlisted as ambassadors of the brand’s sunglasses and prescription frames.

Launched in the 1980s as a De Rigo Group eyewear brand, Police now boasts a wide range of products, all of which stand out for the high quality of the materials used and for their consummately urban spirit.

Police is a brand belonging to De Rigo, world leader in the design, manufacture and distribution of eyewear of indisputable quality.  Founded in 1983, Police very soon established itself as a byword for refined design and a strong image.  Through its identity and market position, which has been consolidated over the years, Police has steadily created a very broad lifestyle concept that includes fragrances, watches, jewellery and small leather goods.  Police collections are distributed in over 80 countries, particularly in Europe, Asia and America.

Lewis Hamilton MBE is a five-time Formula One World Champion and Britain’s most successful F1 driver in history. Currently racing for Mercedes-AMG Petronas Motorsport he is already recognised as one of the sport’s all-time greats.

Lewis made his Formula 1 debut aged just 22. In 2007 he became the youngest World Championship leader during his rookie season, eventually finishing runner up by just a single point. The following 2008 season Lewis claimed the crown on the very last corner of the last race of the season, becoming the youngest and first black driver to win the World Champion the sport has ever seen.

In 2013 he moved to Mercedes AMG F1 and alongside his 1,200 teammates returned the Silver Arrows to the top of the podium with his second and third World Championships in 2014 and 2015, equalling the record set by his childhood hero, the great Ayrton Senna. Still carrying the sense that all his success and sacrifices could be snatched away from him at any moment, Lewis remained focused on winning perfection. He went on to secure two more world titles in 2017 and 2018, joining the great Juan Manuel Fangio and Michael Schumacher as the only drivers to have five or more world championship titles. The most successful British driver in the history of the sport, over the course of the 242 races he has contested Lewis has secured 81 wins, 43 fastest laps holds records for the all-time most career points (3,286), the most wins at different circuits (26), the all-time most pole positions (87).

His approach off the track is just as positive and fearless, constantly challenging himself to grow and drawing inspiration from new places. He has a deep passion for creativity and in his spare time has become a student of fashion. In his role as a brand ambassador for Tommy Hilfiger and Police he has designed his own lines and has become a much sought after front row attendee at the world’s leading fashion shows. Lewis has also loved music since a young age, playing both the piano and guitar, and is an extreme sports fan, holding a sky diving license and regularly surfing during the off season break.

His willingness to embrace what makes him different has defined his values and outlook on life, and in 2016 the fearlessness, inspiration and positivity that drive saw him win the BBC’s Sports Personality of the Year ‪and recognized by TIME Magazine’s ‘100 Most Influential People’ list. A true digital native, Lewis is the most followed and engaged racing driver in the world. He has loyal global fanbase, #TeamLH, and his channels have over 24 million followers, including more than a million fans on Chinese microblogging platform, Sina Weibo. Lewis often shares glimpses into his home life, with clips of him grabbing precious moments with his family and beloved dogs Roscoe and Coco or putting in the hours at the factory and gym giving his fans a taste of the sacrifice and hard work that goes in to each and every success he has on the track.

Looking to the future, Lewis sees himself relentlessly chasing perfection on track, but knows at some point he will need to look beyond F1. His against-the-odds rise to the top of F1 has made Lewis fiercely committed to help youths unleash their potential, wherever it lies and no matter their background – to help them to embrace their difference.

Mercedes-AMG Petronas Motorsport is the works Formula One Team of Mercedes-Benz, competing in the FIA Formula One™ World Championship – the pinnacle of world motorsport and the largest annual sporting series in the world.

Formula One is a uniquely demanding technical and human challenge,  requiring the right alchemy of cutting-edge technologies, high-performance management and elite teamwork to deliver results at 21 Grands Prix around the globe in a race season running from March to December.

Mercedes-AMG Petronas Motorsport set new benchmarks for F1™ success on its way to winning the Constructors’ and Drivers’ World Championships in 2014, 2015, 2016, 2017 and 2018. During those five Championship-winning seasons, the team scored 74 wins, 147 podiums, 84 pole positions, 53 fastest laps and 39 one-two finishes from 100 race starts.

Airspan to Partner With Rakuten Mobile