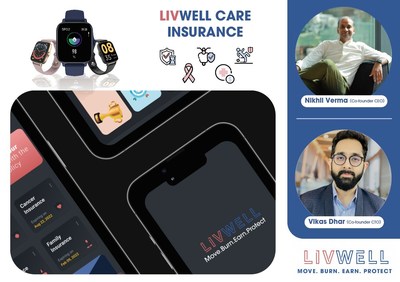 In addition to an investment into LivWell, Flipkart Leap Ahead as part of its program will facilitate mentoring by Flipkart senior leaders.

“While expediting our vision to set up India’s first blockchain-powered insurance distribution in a bite-size and affordable format within an engaging health and wellness landscape, we are confident in harnessing the power of the health ecosystem and rewarding Indian customers for adopting healthier habits. We aim to use blockchain for claim settlement and securing the activity data of our users,” said Nikhil Verma, Co-founder and CEO of LivWell Asia.

Prior to the investment by Flipkart through Flipkart Ventures Fund, LivWell Asia won several awards in 2022, including Insurtech Award with 1337 Ventures and FWD Insurance Alpha Startup Studio which gives access to funding and a launch pad to enter the Malaysian market.

LivWell also qualified for the IFSCA Sandbox earlier this year that allows activity-based insurance products testing in IFSCA markets such as Indonesia.

The brand focuses on end-user engagement with the value of lifestyle and rewards based Insurtech products. Providing wearable devices and holistic services such as gym memberships and nutrition plans among others, the brand’s core product, a fitness app which integrates with wearable smart devices, engages users with fitness challenges including booking classes, and then use activity data to recommend bite-size insurance policies.

LivWell Asia recently launched a pilot programme in Vietnam with embedded insurance smartwatches (LivWell Cosmos) that enable users unlock coverage based on their step count and other parameters at an affordable price point. The Insurtech company will also soon launch NFTs with the limited-release LivWell Lux Smartwatches in Vietnam as a test run.

LivWell Asia is a blockchain-powered Insurtech platform offering engaging health, wellness, and insurance products with operations in Vietnam, India, and soon in Malaysia. Its test market in Vietnam garnered 130,000 active users and over 37,000 lives covered in the last two years. The company has since partnered with Allianz Partners, PVI, Sun Life Insurance, and the largest chain of fitness centers in Vietnam, California Fitness and Yoga centres