Everscale network to ramp up its speed and security with REMP

The Everscale network is about to be upgraded with the Reliable External Messaging Protocol (REMP) protocol. This is a major technological milestone for Everscale, planned for Q2 2022. Implementing REMP will immediately make the network faster and more reliable.

Singapore, May 18, 2022 (GLOBE NEWSWIRE) — REMP is a protocol that enables external information and instructions from user devices to be  delivered to the Everscale blockchain network faster and more securely. In other blockchains, there’s no way to determine a strict queue of external messages. In Ethereum and pretty much every other blockchain, it’s up to miners to decide the priority and order of transactions in the blocks. That’s why blockchain users have to deal with frontrunning, when their messages with trading orders for DEXes receive lower priority than frontrunners’ orders. REMP solves this problem and makes Everscale the only blockchain in the world that guarantees a strict order of message execution.

The protocol has already been included in the Everscale SDK, and it will make it to the mainnet after the other security upgrades. 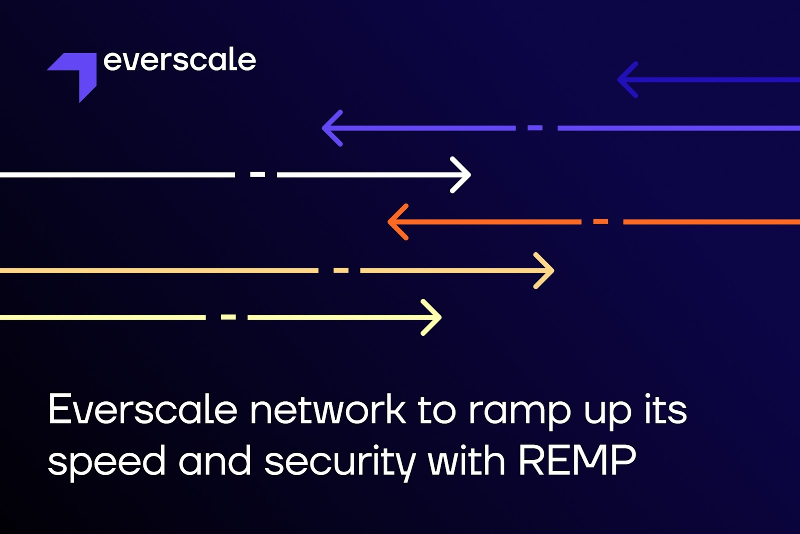 How REMP changes the game

REMP’s main purpose is to guarantee that messages are delivered from any network participants in a particular order within a sub-second timeframe.

There’s also replay protection and anti-spam protection. If any user sends too many messages to the network which fail to be executed, they are banned for increasing periods of time.

The best thing about REMP, which isn’t so obvious at first glance, is the opportunity to replicate the user experience of the Web 2.0 era. Interactions with even the most advanced blockchains are very slow, taking from five to 60+ seconds, which doesn’t compare to the instant response from regular SQL databases. Everscale will also close this performance gap, making it possible for users to get a sub-second response.

Thanks to REMP, the message queue can’t be reorganized, so when a user clicks the button on, let’s say, a DEX, they can consider their request completed. Even while it’s not finalized, it’s possible to calculate the future state of the blockchain, send it to the dApp, and show the success status without waiting several seconds and having to look at a spinning loader on the screen. In practice, this means that the user will see the result of the operation within 0.2 seconds.

The REMP protocol thus makes it possible to simultaneously provide a better user experience, frontrunning protection, and DDoS protection, and ensure that all external messages are received. Thanks to this, Everscale becomes not only the fastest blockchain in terms of TPS, but also the most interactive, blurring the lines between regular applications and dApps.

Everscale is one of the most technologically advanced blockchain networks, incorporating all of the blockchain innovations and concepts of recent years. Its versatility gives it the potential to become a decentralized hub for lots of blockchains and resource-demanding applications such as GameFi, DeFi, supply chains, etc. Due to its dynamic multithreading and sharding technology, there’s always more room to add new nodes and shards to handle any load – and that’s something that no other blockchain can offer yet.

Everscale has powerful developer tools, such as compilers for Solidity and C++, SDK and API, client libraries ported to more than 20 languages and platforms, and a range of decentralized browsers and wallets.

The ICOA Fund is Officially Live