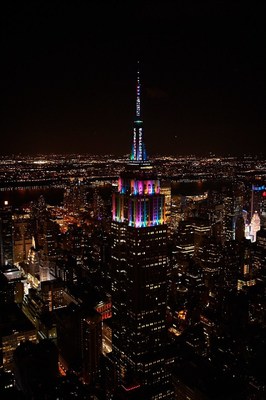 To keep the light of New York City bright, the light show will replay on Saturday, March 28, and then again from Monday, March 30 through Thursday, April 2. On Sunday, March 29, the Empire State Building will shine in a dynamic heartbeat from 9:00 p.m. to 10:00 p.m. in support of the “FOX PRESENTS THE IHEART LIVING ROOM CONCERT FOR AMERICA.”

To honor the first responders who tackle this health crisis daily, Z100’s Elvis Duran will kick off every light show at 8:55 p.m. with a spotlight interview to highlight the amazing individuals who are on the front lines of the fight against COVID-19.

ESRT’s Empire State Building and IHRT’s Z100 will premiere new shows each Friday night as we work together to beat COVID-19. Listen and watch for the announcement of a new music-to-light show that will premiere on Friday, April 3, and play nightly for one week.

Remember to comply with the directions of authorities and maintain social distance while you watch from your window, rooftop, or sidewalk. The power of iHeartMedia’s Z100 and the icon of New York City, the Empire State Building, join to help our city, our country, and our world heal and maintain perspective. Additionally, the show, designed by world-renowned lighting artist Marc Brickman, will be streamed on the Empire State Building’s Facebook page.

“The Empire State Building has always served as an international symbol of hope, of challenges overcome, and of New York City itself,” said Anthony E. Malkin, Chairman and CEO, ESRT. “With iHeartRadio, the radio network of America, she provides comfort and inspiration to New Yorkers, America, and the world.”

The public is invited to join the conversation by posting a video of themselves to their social media pages with the hashtag #EmpireStateBuilding and #iHeartNewYork tagging both the Empire State Building and iHeartRadio to share how we are all still able to connect with each other.

“New Yorkers always find a way to unite and encourage one another during challenging times,” said Tom Poleman, Chief Programming Officer for iHeartMedia. “Our hope is to continue to provide some comfort to our listeners through the healing powers of music, as we show our country’s resilience and strength with a music-to-light show through New York icons Z100 and the Empire State Building.”

For more information about the Empire State Building and iHeartMedia, please visit www.empirestatebuilding.com and www.iHeartMedia.com.

About iHeartMedia New York
iHeartMedia New York owns and operates WHTZ-FM, WKTU-FM, WAXQ-FM, WWPR-FM, WLTW-FM and WOR-AM. iHeartMedia (NASDAQ: IHRT) is the number one audio company in the United States, reaching nine out of 10 Americans every month – and with its quarter of a billion monthly listeners, has a greater reach than any other media company in the U.S. The company’s leadership position in audio extends across multiple platforms, including more than 850 live broadcast stations in over 150 markets; digital radio via its iHeartRadio digital service available across more than 250 platforms and 2,000 devices; through its on-air influencers; social; branded iconic live music events; and podcasts as the #1 commercial podcast publisher. iHeartMedia also leads the audio industry in analytics, targeting and attribution for its marketing partners with its SmartAudio product, using data from its massive consumer base. Visit iHeartMedia.com for more company information.