NEW YORK, July 5, 2020 /PRNewswire/ — For the first time in the history of New York City, fireworks were launched from the Empire State Building’s 72nd and 103rd floors, and from its famed 86th Floor Observation Deck. Its lights put on a synchronized display in the only live component of NBC’s broadcast of the 44th Annual Macy’s July 4th Fireworks® Spectacular. The Heart of New York City, and the international icon of the city so nice they named it twice, put on an unprecedented display to Frank Sinatra’s immortal New York, New York.

The Building’s music-to-light show was designed by world-renowned lighting designer Marc Brickman and his team at Tactical Manoeuvre, executed flawlessly under a clear night sky. The smoke from the fireworks accented the special light show that is now available on the Empire State Building’s YouTube channel.

“We are the Heart of New York City, the greatest city in the world.  Over this July 4th, we join Macy’s and bring joy to our reawakening home as we continue our unique Ambassadorship to the world,” said Anthony E. Malkin, Chairman, President and, CEO of Empire State Realty Trust. “We can’t wait to welcome visitors back to our brand new, $165 million, state-of-the-art Observatory with its unique focus on Indoor Environmental Quality with Merv-13 filters, Atmos Air, and outside air ventilation.”

The Empire State Building Observatory is slated to open, at the latest, in Phase 4 of the reopening of New York City.  In the meantime, fans of the building can share their photos of the show on their social media platforms with #EmpireStateBuilding. A link to photos from the event, with credit to Kent Miller/Macy’s, can be found here. 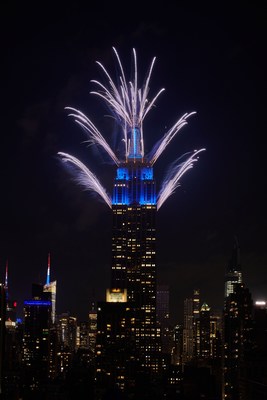