EBG Federation Releases the 2019 Edition of the Annual Position Paper

NEW DELHI, July 11, 2019 /PRNewswire/ — The EBG Federation (erstwhile European Business Group – EBG), the representative body of European business interests in India, released the 17th edition of the Annual Position Paper in the national capital on the 10th of July 2019 at the Taj Mahal Hotel, Mansingh Road, New Delhi. The Position Paper is EBG’s main tool for advocacy with its stakeholders which highlights the EBG’s views on government policies. It is a collective expression of the views of the members of the EBG Federation and its knowledge partners on key aspects of the business environment in India that affect the development of India-EU business relationships. The paper was released by Mr. Raman Sidhu, FCA, Chairman, EBG Federation, H.E Mr. Tomasz Kozlowski, Ambassador of the European Union to India and senior representatives from EBG Federation. The release of the paper was preceded by key note address by Mr. Amitabh Kant, CEO, NITI Aayog, and speeches by Mr. Ashwani Lohani, Chairman Air India, Mr. C. K. Mishra, IAS, Secretary, Ministry of Environment, Forest and Climate Change, and Dr. Rajeev Ranjan, IAS, Secretary GST Council & Special Secretary, Department of Revenue. 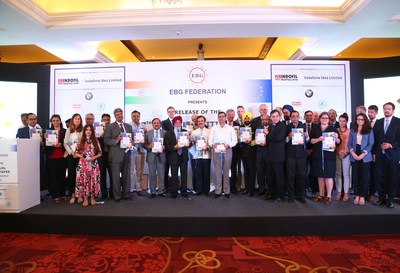 On the grand occasion of the Position Paper release, Mr. Sidhu commented, “I am delighted that our EBG Federation’s members’ collective efforts of last one year found fruition in the 2019 Position Paper.” Speaking as the Chief Guest at the launch event of the position paper, Mr. Amitabh Kant praised the stage that has been set by a wonderful association between the Indo-EU trade relations, he emphasized on his belief that, “Europe has strategically been the most important business partner for India“. Dr. Ranjan was all praises for the mission of the paper and emphasized on the, “transformational change that has come through the GST regime through decisions of consensus with diverse holders and different interests.” Mr. C.K. Mishra further put perspective on mutual learning which has given shape to thoughts taking this relationship strongly forward. He also put great emphasis on the excellent relations with EU, coming as a great service not only to trade relations but to the existing environment.

The release was further received with a Vote of Thanks from Mr. Rajeev Gupta, Senior Advisor, EBG Federation and Mr. P. Balaji, Chief Regulatory and Corporate Affairs Officer, Vodafone Idea Limited. Ambassadors and other senior diplomats also graced the event with their presence.

EBG Federation in India aims to promote Europe as India’s most preferred business partner thus creating an environment that allows European Business to flourish. EBG Federation aims to create a more conducive environment for the Indo-European trade to flourish and work towards promoting ease of doing business for FDIs to gain further momentum in India. The EBG Federation is supported by the Delegation of the European Union to India and works with the primary objective to actively support growth in India-EU trade relations, and become the most relevant advocacy group for European business in India, and ensure that the needs of European business are well presented to policy and decision makers. The EBG Position Paper expresses the relevant concerns of EU Corporates in carrying-on or growing their business in the current environment in India and proposes key policy reforms that will be conducive to the growth of business and what are in the realm of possibility for the Indian Government to put in place.