REYKJAVIK, Iceland, July 19, 2021 /PRNewswire/ — In a paper published in Nature genetics today, Scientists from deCODE genetics, a fully owned subsidiary of Amgen, report sequence variants that associate with birth weight and demonstrate how these variants affect birth weight through both the maternal and fetal genomes. Although birth weight is associated with a range of health outcomes, it is debated how much these relationships are through the fetal genome or affected by the intrauterine environment, and hence the maternal genome.

A total of 243 fetal growth variants are reported and 141 of them were grouped into four main clusters based on separating the effect of the variant on birth weight though the maternal versus fetal genome. The majority of variants show an effect only in the fetus and a quarter of those show evidence of a parent-of-origin specific effect on birth weight i.e. the effect on the fetus differs depending on whether the child inherited the variant from the mother or the father. Some variants have an effect only in the mother but around 30% affect birth weight both through the maternal and fetal genomes, where for some the effect is in the same direction, no matter whether from mother or father, while for others the effect is in opposite directions.

“The ability to analyse directly the effect of each of the transmitted alleles and the maternal non-transmitted allele allows us to separate what happens through the mother from a direct effect on birth weight through the fetal genome,” says Valgerdur Steinthorsdottir scientist at deCODE Genetics and author on the paper.

The study reports an expanded GWAS meta-analysis of 400,000 children, 270,000 mothers and 60,000 fathers, combining data from the Icelandic Birth Register for 125,000 newborns and their parents with public summary level fetal growth data on children and mothers from the Early Growth Genetics Consortium and UK Biobank. The effects of the fetal, maternal and paternal genomes on birth weight were analysed and the study further includes analysis of birth length and ponderal index.

“It is clear from these results that in our beginnings we are not only shaped by the half of our maternal genome that is transmitted to us but also the untransmitted half,” says Kari Stefansson CEO of deCODE genetics. “Here we show how the influence of the two halves can be separated.”

Based in Reykjavik, Iceland, deCODE is a global leader in analyzing and understanding the human genome. Using its unique expertise in human genetics combined with growing expertise in transcriptomics and population proteomics and vast amount of phenotypic data, deCODE has discovered risk factors for dozens of common diseases and provided key insights into their pathogenesis. The purpose of understanding the genetics of disease is to use that information to create new means of diagnosing, treating and preventing disease. deCODE is a wholly-owned subsidiary of Amgen (NASDAQ: AMGN). 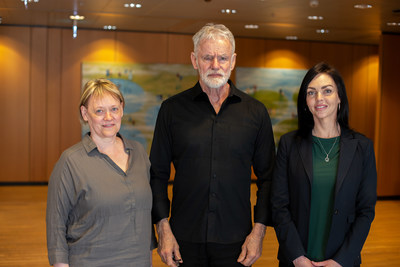