SEOUL, South Korea, Dec. 30, 2019 /PRNewswire/ — When we think of Korea, we immediately relate it to crowded metropolises. Crystal Lagoons has recently signed one of the firm’s most important contracts in the country, that entails 30 Public Access Lagoons (PAL), created and patented by the multinational innovation company. 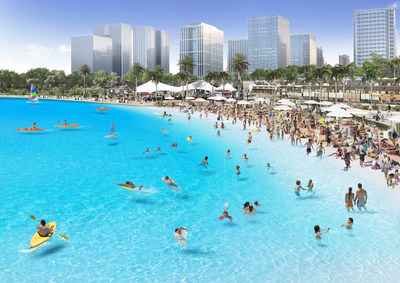 The annual sales for the projects are estimated to be over US$ 1.000 million and, once operational, projections indicate that these PALs alone will receive more than 30 million people on a yearly basis. The projects will be developed in several cities across the country as result of a partnership between Crystal Lagoons and NexPlan.

“PALs transform any location into the most entertaining spot in the city, and add significant value to urban environments, creating beach life on people’s doorstep,” explains Cristián Lehuedé, Executive Director at Crystal Lagoons.

Attractive amenities surround these monumental crystalline bodies of water, which can be accessed via ticketed entry, such as restaurants, beach clubs, retail stores, amphitheaters as well as entertainment and cultural activities, for hosting concerts, shows and film screenings, converting PALs into the meeting spot of the 21st century.

The first project in Korea will be located in Songdo International City, on public land granted under concession. It will include a 6.8-acre crystalline lagoon and will be surrounded by restaurants, retail stores, and an amphitheater for shows, etc.

“One of the main forms of entertainment for Koreans are shopping malls. PALs will offer locals a new experience, allowing them to change their lifestyle. This is part of a growing, worldwide trend in which malls are being reconverted into open spaces and the need to offer new functional alternatives and experiences, such as these lagoons,” adds Lehuedé.

According to the executive, the worldwide success of PALs means “they concentrate 80% of Crystal Lagoons contracts. Their allure lies in that they are used by large numbers of people. Furthermore, they allow for a rapid return on investment, since they have low construction and maintenance costs. Crystal Lagoons already has 200 PAL projects in different stages of negotiation, construction and operation throughout Europe, Asia, America and Africa, specifically Thailand, Spain, Italy, Turkey, Indonesia, Dubai, South Africa, Australia and Chile,” confirms Cristián Lehuedé.

TET Comes Early for FE CREDIT Cardholders, with a Bouquet of Incredible Offers from FE CREDIT