Vancouver, Nov. 04, 2021 (GLOBE NEWSWIRE) — Against the backdrop of an aging population and compounding labour shortages, there is a substantial talent pool that is currently being overlooked.

A new study from the non-profit Angus Reid Institute in partnership with the Rick Hansen Foundation finds that two-in-five (40%) of those living with a disability say that companies fall short when it comes to hiring those who are disabled.

Barriers also persist in the workforce, with another two-in-five (39%) of those living with disabilities saying that Canadian companies have a way to go when it comes to supporting their employees who have a disability.

The more severe the disability someone is living with, the worse they rate Canadian companies. Half (48%) of those with severe disabilities say that companies are bad at hiring those with disabilities, while 46 per cent say the same about the supports offered by corporate Canada to disabled employees. 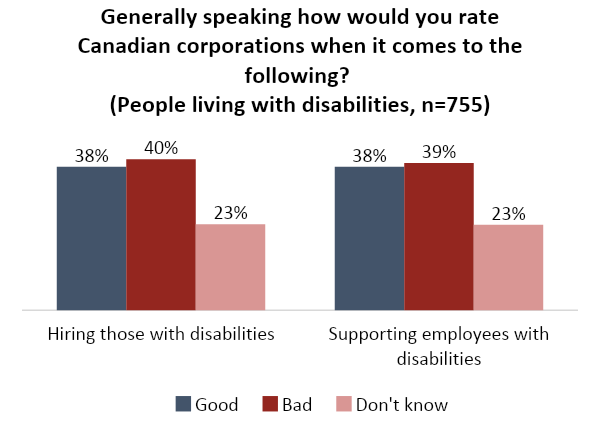 The Angus Reid Institute conducted an online survey from August 16 – 20, 2021 among a representative randomized sample of 2,085 Canadian adults who are members of Angus Reid Forum. This included a national general population survey sample of 1,610 as well as an augment of Canadians living with disability to bring that key survey sub-sample up to 983. For comparison purposes only, a probability sample of this size would carry a margin of error of +/- 2.5 percentage points, 19 times out of 20. Discrepancies in or between totals are due to rounding. The survey was self-commissioned and paid for by ARI. Detailed tables can be found at the end of this release.

When a space is said to be “accessible,” it means that it is easy to get into and move around in for everybody who might need to use it including those who are injured, the elderly, parents with children, and those living with disabilities.

Previous studies have found that there is broad-based support for improved accessibility within Canadian society with nine-in-ten (91%) agreeing that accessibility is human right, not a privilege. Another done in 2019 found that seven-in-ten think universal accessibility should be the goal for newly constructed buildings.

Earlier this year another partnership study with RHF found that nine-in-ten (92%) Canadians agree that taxpayer funded projects should be held to the highest accessibility standards.

Despite this broad based support for higher levels of accessibility, disability advocates have highlighted that many barriers to accessibility persist and that there remains much room for improvement across Canada.

Related reports:
Platform Inaccessibility? Canadians living with disabilities say key issues are being overlooked in Election 44
Disability in Canada: Does closing the accessibility gap literally start from the ground up?
Disability and Accessibility: Canadians see significant room for improvement in communities where they live
Accessibility: A source of future anxiety and a significant consideration for Canadian consumers today

When asked specifically about how accessible they found restaurants, shops, and other private businesses to be on a scale out of ten, three-in-five Canadians rated them as accessible to very accessible (between six and 10 on the scale).

There is an important difference, however, in how those living with disabilities perceive the accessibility of private businesses versus those who have no exposure to disability at all. Of note, only half (54%) of those living with a disability think that accessibility at Canadian private businesses ranks as above average, with few saying that it’s great (see detailed tables).

Part of the accessibility of a private business stems from the government provided infrastructure that surrounds it (e.g., curb cuts, accessible public transit, snow removal, etc.) and to what extent it facilitates, or not, access to the business in question. A second factor are the decisions made by companies as to how they train their staff and design their stores or offices — i.e., how accessible are the experiences they are providing their customers and clients.

On this second point, three-in-five (62%) of those with disabilities think Canadian companies do a good or great job of providing accessible experiences for customers and clients living with disabilities: 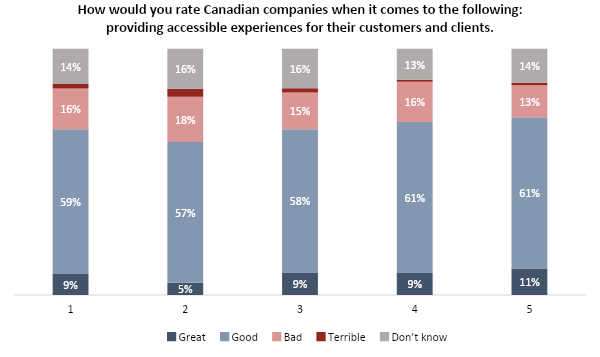 The perception of corporations would appear to correlate with the severity of the disability that the respondent is living with. Two-thirds (69%) of those whose daily activities are least impacted by their disability say that Canadian companies do at least a good job. This number falls to 55 per cent among those with the most severe disabilities: 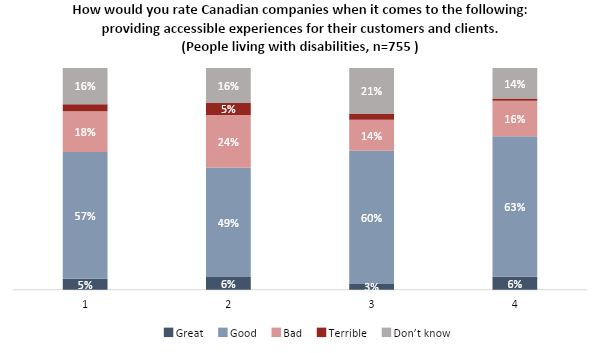 If Canadians living with disabilities saw room for improvement in terms of their experience as patrons and clients, their views of Canadian corporations as employers were more negative. Overall, 40 per cent of those surveyed said that corporations were either bad or terrible when it comes to hiring those with disabilities: 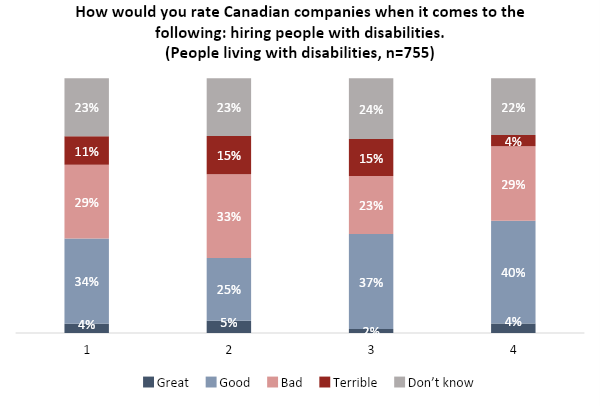 These opinions reflect divergent employment realities in Canada. A comparison of employment rates of Canadians aged 25 to 64 by disability status done in 2016 indicated that only 59 per cent of Canadians with disabilities were employed at a time when the national average sat at over 80 per cent. Echoing trends witnessed here, this study further found that employment outcomes were correlated with severity of disability — the more severe the impact of the disability the less likely an individual was to be employed.

There are also variations in opinion by age and gender. Disabled women are more likely to say companies are doing a poor job of hiring those with disabilities (45%) than their male counterparts (35%). Of note, those at earlier stages of their careers have the most negative assessments: over half (55%) of those with a disability between the ages of 18 and 34 say companies do either a bad or terrible job when it comes to hiring disabled Canadians. 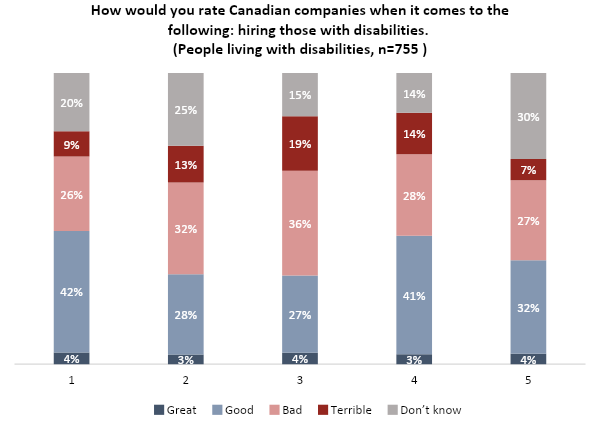 In addition to the barriers faced when trying to enter the workforce, those living with disabilities can encounter further challenges in the workplace. These can range from inaccessible workplaces (e.g., cubicles or offices not having enough space for wheelchair users, no elevators, etc.) to not being provided with the appropriate tools for the job (e.g., screen readers, modified workstations, etc.).

When it comes to how Canadian companies fare in providing workplace supports, however, those living with disabilities highlight that there is much room for improvement. Echoing a 2019 study done by Statistics Canada, those with the least severe disabilities had the most favourable views with almost half (46%) saying that companies did a good job.

Among those with the most severe disabilities, the same number (46%) instead ranked Canadian employers as either bad (33%) or terrible (13%). 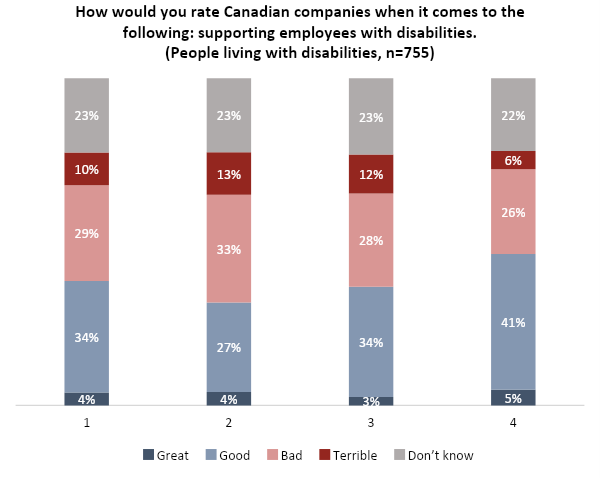 Almost half (46%) of men living with disabilities responded that companies do a good or great job of supporting disabled employees. In contrast, only one-third (33%) of women said the same while another quarter (26%) said they didn’t know. 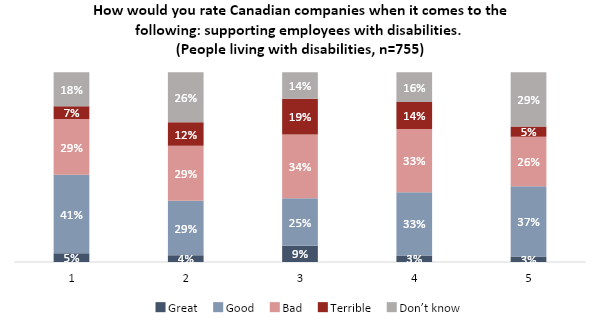 Equity, diversity, and inclusion (EDI) policies are often seen as an important vehicle for both promoting a healthy workplace and leveraging the skillsets of all team members. If EDI strategies are often associated with questions of race, sexuality, or gender expression, an article in the Harvard Business Review warned that only four per cent of companies considered disability to fall under the scope of such policies (note: the original report that contains this number appears to have been taken down).

In stark contrast, among respondents who reported having an EDI strategy in their workplace, three-in-five (61%) said that, as far as they knew, it contained provisions for supporting employees with disabilities. 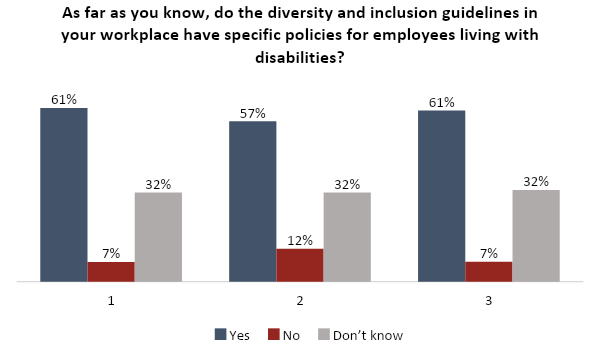 When it comes to whether disability should be included in EDI strategies, eight-in-ten (78%) Canadians responded yes: 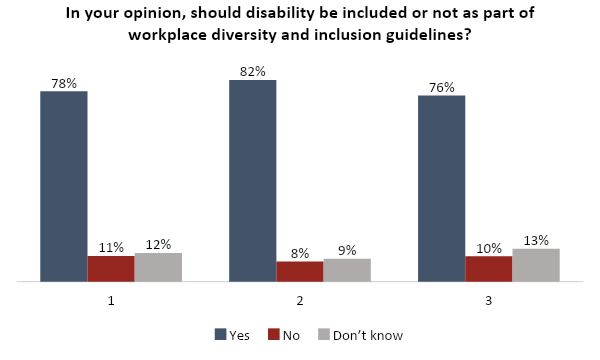 As conscious consumerism continues to grow, there have been a number of initiatives designed at helping consumers decide where they want to spend their dollars. These range from initiatives such as the fair trade movement, which seeks to ensure that small-scale farmers and agricultural workers get fairly compensated, to allowing businesses to tag themselves as LGBTQ-friendly on Google Maps. 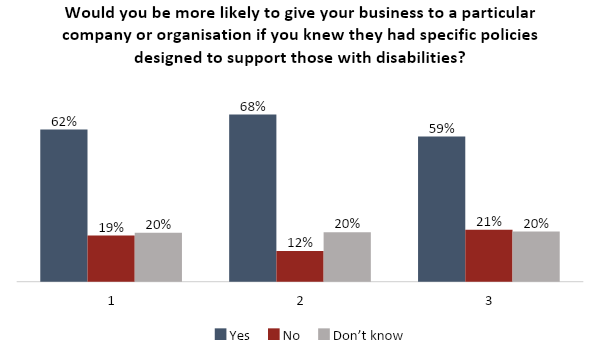 For detailed results by severity of disability and proximity to disability, click here.

For detailed results by age and gender, click here.

About ARI
The Angus Reid Institute (ARI) was founded in October 2014 by pollster and sociologist, Dr. Angus Reid. ARI is a national, not-for-profit, non-partisan public opinion research foundation established to advance education by commissioning, conducting and disseminating to the public accessible and impartial statistical data, research and policy analysis on economics, political science, philanthropy, public administration, domestic and international affairs and other socio-economic issues of importance to Canada and its world.