MUMBAI, Aug. 24, 2019 /PRNewswire/ —  Shiv Shankar Gupta, consumer activist who recently took up the issue of toxic contents in premium salt brands sold in India, has urged the people to be wary of the adverse effects of premium iodized salt brands which allegedly contain poisonous substances such as potassium ferrocyanide. 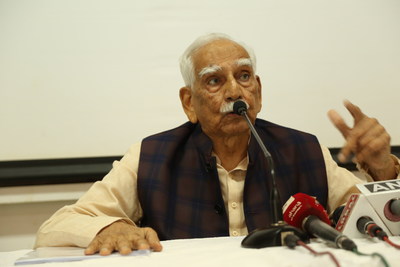 “The premium salt company recently admitted to using potassium ferrocyanide within the permissible limits. However, they are still using the European standard number for food additive, which is tough for a common man to understand,” he said, adding that this component has already been prohibited for consumption in the US and the Great Britain.

“However, it is quiet unfortunate to see that Indians are being fed poison by major salt companies that have been ruling the market for the last twenty years,” said Gupta, who has been on a mission to get salt rid of all poisonous substances. He addressed the media recently in Mumbai and raised concerns over the health of public who are using the salt of premium brands.

“Recent researches have revealed that the continuous usage of salt sold by premium brands can have an adverse impact on health. It was found that people using regular iodized salt are more at the risk of high blood pleasure, leading to various kinds of life-threatening diseases,” said Gupta, who is also known as the father of the Indian gemstone industry.

He pointed out the failures of regulatory bodies in the salt industry. “They allowed the corporate behemoths to sell vacuum salt or processed salt as edible salt. This is not salt at all and is much inferior to the natural salt. The food regulator has fixed such low standards for edible salt to be sold in the country,” he added.

“We are already blessed with the deposit of best natural salt in the world, which is worth more than five billion dollars. You cannot get better salt than the one from the Sambhar Lake. But sadly, big corporate houses, in collusion with the government authorities, have been selling industrial salt as edible salt. Natural salt from Kutch and other coastal areas of India comes with more than 80 plus minerals. They are far more superior in quality than what we get as refined salt in the market. Despite having such a national treasure, we are being fed industrial residue masquerading as salt.”

“Salt manufacturing companies started producing salt for industrial use in a big way. The residue of chemical process is known as industrial waste. As per rules for disposing industrial waste, the residues have to be sent back to the deep sea. However, these industrial salt manufacturers, in connivance with the Salt Department, declared that the residue actually contains sodium chloride, which is salt meant for human consumption as per the revised standards fixed for quality of common salt in India,” he explained.

“The end result of the laxity of the the regulatory authorities is that Indians are forced to consume harmful vacuum salt,” said Gupta.

Shiv Shankar Gupta, known as the father of the gemstone industry in India, is the pioneer in promoting natural salt. He has witnessed the transition of the salt industry throughout the pre-and-post-iodization period. He started off as an exporter of pink salt and later established himself as a promoter of indigenous salt of India. He has been advocating the need of promoting natural salt, as, according to him, fortification on food is not required in order to gain iodine. The National Geographic has hailed him as the largest emerald dealer in the world in value as well as volume. He has been presented with a ‘Lifetime Achievement Award’ in 1992 by The Diamond & Colored Stone Association, New York.