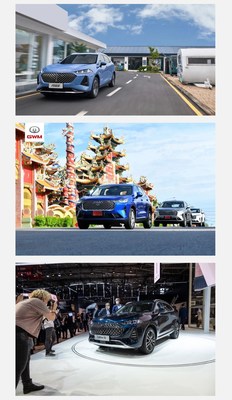 The Hybrid technology is an essential part of the overall strategic plan of GWM. Motivated by the R&D concept of “large-investment”, GWM has independently designed and developed the L.E.M.O.N. platform through five-year efforts, investing RMB 20 billion. This platform can be adapted to two different hybrid architectures, namely Dedicated Hybrid Technology (DHT) architecture and P2/P2+P4 architecture.

The L.E.M.O.N. DHT, a highly integrated petrol-electric hybrid technology, can achieve optimum performance in all speed ranges and all scenarios through coordination between efficient hybrid engine and the dual-motor hybrid system to bring users fast, smooth, quiet and economical driving experiences.

HAVAL H6 HEV, which made its global debut in Thailand in June, was equipped with this technology. Once released, it stirred the local new energy vehicle market and was favoured by local users. Its market sales ranked No.1 in the market segment of Thailand in a short time.

This technology was also adopted by WEY MAQIDUO(Chinese name), which was launched at Tianjin International Auto Show on September 29, 2021. This new model was capable of fast power response, strong acceleration capability, smooth gear shifting, and quiet and comfortable driving in various scenarios. Because of using a high-power and large-capacity HEV battery, it is quite fuel-efficient with a total driving range of up to 1,100 km and comprehensive fuel consumption of only 4.7 L/100 km.

Additionally, WEY Coffee 01 PHEV adopts a hybrid architecture of P2+P4. The vehicle appeared at the International Automobil-Ausstellung (IAA) held in Munich on September 6, 2021. This drive motor is respectively installed on the front and rear axles to rival the electric four-wheel drive system without the driveshaft. This combination features strong power, sound economic efficiency while being applied in multiple scenarios, diversified driving modes and flexibility. This brings plug-in hybrid power suitable for multiple scenarios to Coffee 01 PHEV, supporting an acceleration capability of 5s/100km and a maximum speed of 235 km/h.

As Jack Wei, Chairman of GWM, said at the 2025 Strategy Conference, in the next five years, GWM would expect to invest up to a total of RMB 100 billion in R&D, especially in pure electric, hydrogen energy and hybrid technologies, to maintain its technical leading position.