NEW YORK, Jan. 23, 2020 /PRNewswire/ — China’s leading liquor producer Wuliangye Yibin Co., Ltd. sent its greetings to the Chinese people all over the world from the “China Screen” at Times Square, New York, before the arrival of the Chinese Lunar New Year, which falls on January 25, this year. 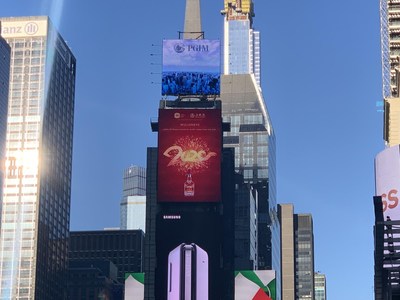 Its classic Wuliangye baijiu liquor looked spectacular on the screen, against the backdrop of bright red and golden fireworks.

Times Square, known as the “Crossroads of the World”, has a daily traffic of 500,000 people.

Wang Yuan, a student from Beijing, expressed his excitement after seeing Wuliangye’s New Year greetings, saying it’s like running into an old friend in a foreign country.

Liu Yao, a native of Jinan, capital city of east China’s Shandong Province, said that Wuliangye has always been a part of his memory of the New Year’s taste.

New York resident Jim said that the Chinese New Year seemed to be bringing all Chinese people together. He also became curious about Chinese baijiu liquor, and hoped to have a taste of it soon.

2020 is the Year of the Rat for the Chinese people. As the head of the zodiac sign, rat represents the beginning of a new cycle. By sending out New Year’s greetings, Wuliangye also shared with the world its culture of harmony and the charm of Chinese baijiu liquor, according to the liquor maker.

In its New Year greetings, Wuliangye also shared its identity as an official partner of the China Pavilion at the Dubai World Expo 2020.

According to Wuliangye, as an official partner, it will play an indispensable part in the events at the China Pavilion, and along with other Chinese brands, share with the world China’s efforts in promoting global common development, building a community of shared future for mankind, and creating a beautiful global village.

In recent years, Wuliangye has frequently appeared at important global events in the political, economic, and cultural sectors, becoming a crucial mean by which overseas friends come to understand Chinese traditional culture, especially the baijiu culture.

The company said it will continue to uphold the concept of shared harmony and beauty, champion the development of a liquor community of shared future, and promote common development and friendly exchanges of all parties in the world.