XI’AN, China, May 14, 2019 /PRNewswire/ — The China (Shaanxi) Pilot Free Trade Zone Development Forum was held in Xi’an, the capital of Shaanxi province on May 12. The forum was hosted by Shaanxi Provincial People’s Government and organized by a cohort of firms and organizations, including the Shaanxi Provincial Department of Commerce (the provincial office handling the promotion of free trade) and the Belt and Road Pilot Free Trade Zone of Xi’an Jiaotong University. 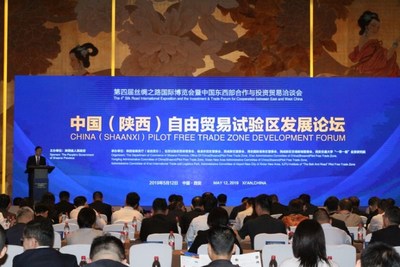 Themed “deepening reform and opening up and promoting high-quality development in the pilot free trade zone”, the forum invited officials from government authorities involved in the advocacy and promotion of free trade zones, subject matter experts on the topic from within China and from abroad, representatives from some of the most well-known international free trade zones as well as from several leading think tanks to discuss enhancing the zones’ ability to meet the central government’s “opening up” objectives, improving the business environment within the zones, creating more opportunities for further cooperation and development among free trade zones under the Belt and Road Initiative, in addition to furthering the reform and opening up of inland pilot free trade zones and building consensus for the high-quality development of Shaanxi Pilot Free Trade Zone.

In the past two years since its inception, China (Shaanxi) Pilot Free Trade Zone has strategically positioned itself to deliver innovative solutions around fundamental models that are replicable and scalable, and, working independently, has made quite a lot of progress in doing so. The zone has also aggressively developed a hub, portal and blueprint for a mobile economy that will lead to the build out of an infrastructure to support the Belt & Road initiative as well as the further development of Western China. The zone has explored and experimented with different models for streamlining administration, strengthening regulation and improving services in a move to facilitate investment, trade, cultural exchanges and international cooperation in modern agriculture, demonstrating the pilot free trade zone’s position as a test field for further enhancing reform and opening-up policies.

As of the end of March 2019, the zone was home to 40,694 businesses and organizations, including 347 foreign-invested companies. The zone witnessed a significant decrease in overall customs clearance time. Foreign trade in and out of the zone valued 264.9 billion yuan (approx. US$38.6 billion) in 2018, accounting for 75% of Shaanxi province’s total exports and imports. Driven by the pilot free trade zone, the province recorded combined exports and imports amounting to 351.38 billion yuan (approx. US$51.3 billion) and total output value amounting to 2.44 trillion yuan (approx. US$356 billion) for the year, up 29.3 percent and 8.3 percent, respectively, with the latter 1.7 percentage points higher than China’s average growth rate. This has set a new starting point for the province’s economic and social development alongside the initial goal of promoting the country’s opening up initiatives.

Shaanxi provincial vice governor Zhao Gang said that the Chinese government confirmed its determination to deepen reform and opening-up in the new era with practical measures during the 2nd Belt and Road Forum for International Cooperation. Shaanxi will leverage the pilot free trade zone’s position as a laboratory for developing and testing policies that support the implementation of the measures with the aim of providing companies with a fair, open, unified and efficient access to a friendly legal and business environment that assists them in expanding their globalization efforts, while raising the bar and delivering according to the new “bar” on what is expected in terms of the country’s reform and opening-up. The province plans to work together with countries targeted by the Belt & Road initiative with a goal of creating a more productive future by capitalizing on the pilot free trade zone serving as a platform to strengthen communications, exchanges and pragmatic collaborations on projects that will bring benefits to all.

For more information about the event, please visit http://ftz.shaanxi.gov.cn/

China (Shaanxi) Pilot Free Trade Zone is one of China’s pilot free trade zones approved by the Chinese government on August 31, 2016 as part of the third group of such zones to be approved as well as the sole pilot free trade zone in northwestern China. The zone is strategically positioned to deliver innovative solutions for fundamental models that are replicable and scalable, to implement the Central Committee of the Communist Party’s and the State Council of China’s requirements for enhancing the Belt & Road Initiative’s role in the development of Western China while supporting the access of the country’s western gateway cities to foreign markets, to transform the pilot free trade zone into a test field for the implementation of the country’s ongoing reform and opening up policies, to lead other Chinese inland cities in reform and opening up and to create a key base to support the economic cooperation and cultural exchanges with countries targeted by the Belt & Road initiative.