HANGZHOU, CHINA, July 19, 2022 (GLOBE NEWSWIRE) — Recently, the China National Silk Museum held Tuyuhun tour exhibitions in Hangzhou, Dulan, and Samarkand, namely Qinghai Path: The Silk Roads in the 6th-8th centuries, Forty Years of Archaeology at the Reshui Tombs in Dulan, Silk and Silk Roads: from Hangzhou to Samarkand. These exhibitions successfully reproduce the dusty history of the Qinghai Path from the 6th to the 8th century. According to Dr. Feng, the chief curator of the three exhibitions from the China National Silk Museum, the three exhibitions were the first to review the 40-year process of Tuyuhun and Tubo archaeology in Qinghai in the form of exhibitions, which restores the history of the people of Tuyuhun who dominated Qinghai from the 4th to the 7th century and presents the cultural exchange on the Qinghai Path. 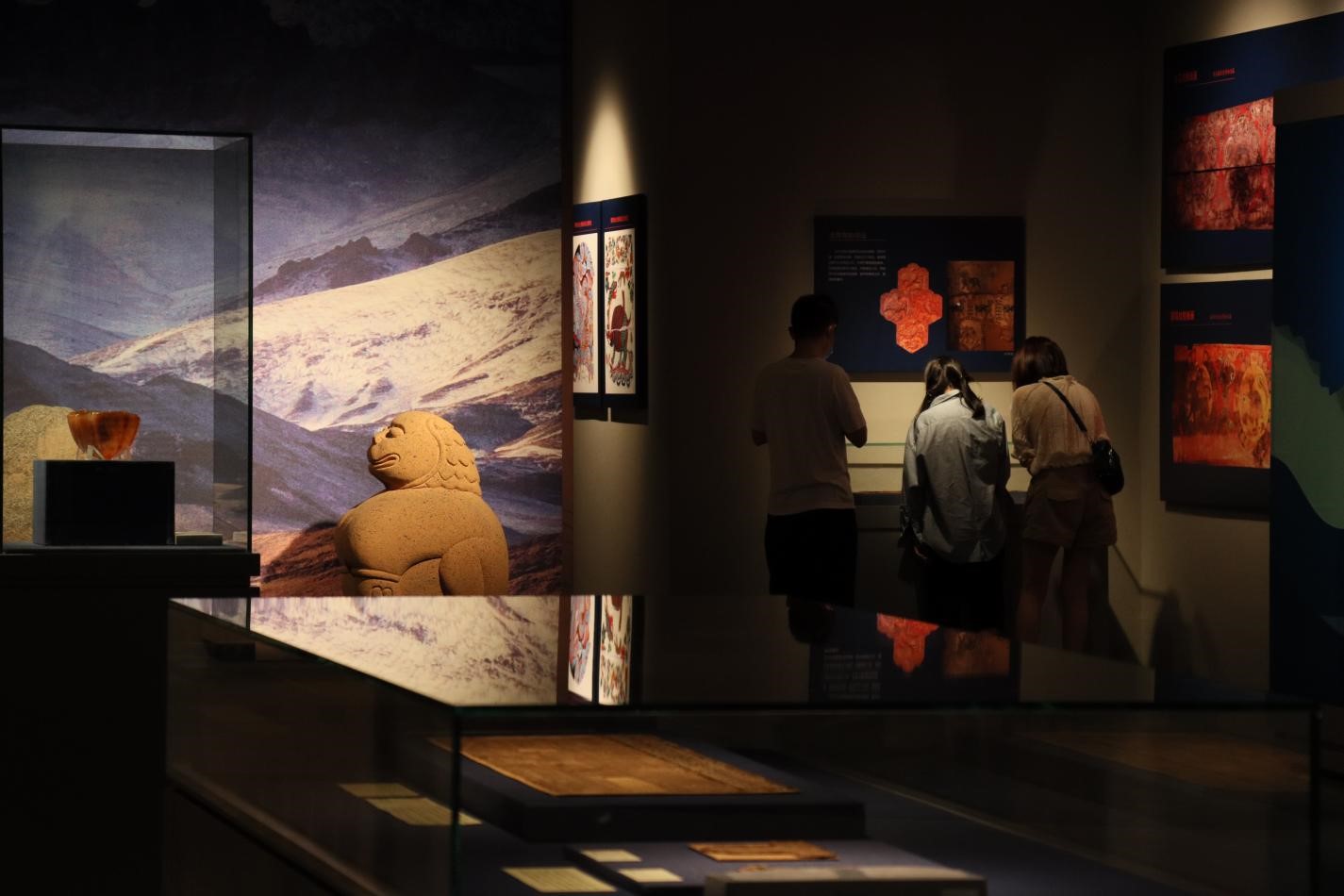 Content of Qinghai Path exhibition
The Qinghai Path exhibition is divided into four sections: a brief introduction to Tuyuhun tribe, the life of Tuyuhun people, cultural exchanges on the Qinghai Path, and Tuyuhun-Tubo archaeology. Tuyuhun’s life includes four major contents: clothing, food, housing, and hunting. Not only the short sleeve garment, head wrapper, embroidered shoes, and accessories from Murong Zhi’s tomb, but also gold leaf carvings with figures in costumes unearthed from the tombs of Reshui, as well as a weaving loom were on display. The food showcase consists of mostly utensils, including golden bottles, silver bowls, agate cups, clay pots, and silver chopsticks and spoons. The hunting part is mainly made of various gold harnesses, saddles, horse belts, buckles and so on. This section also restores a set of scenes with tents, costumes, hunting, and feasting scenes where the Tuyuhun people lived around the 8th century. 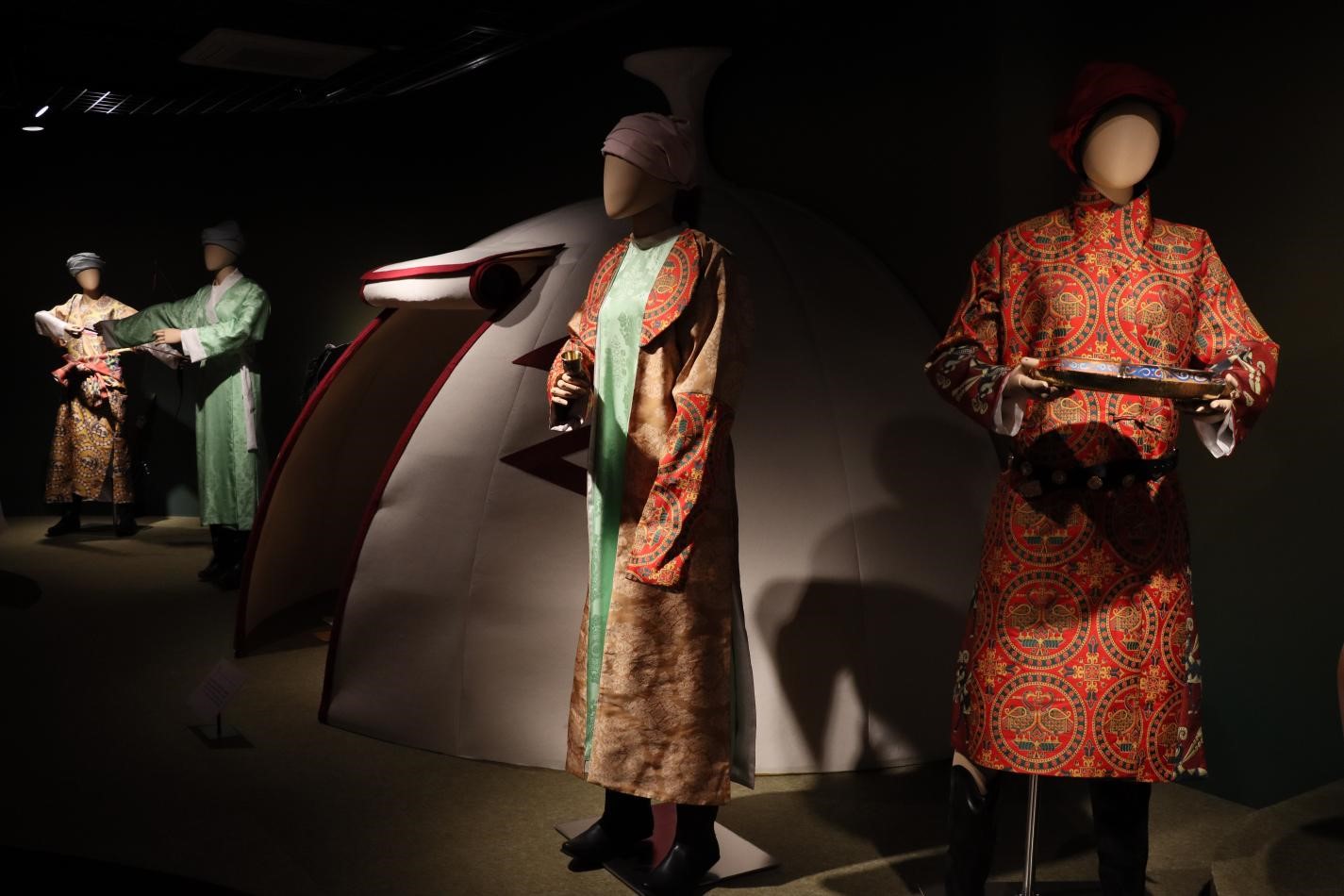 The exhibition also reproduces the gilt-silver crown with 3D modeling. The main body of this crown is mainly made of four pieces of gilt silver with turquoise inlaid. The crown surface combination is in a square bucket shape. The bottom surface of the crown is square, with each side 17.5 cm long, the top 37 cm high, and the maximum width of 36.5 cm. The pattern on the front and back is 2 dragons frolicking, with a phoenix standing on a lotus pedestal on each side. The neck guard pattern on the back is a pair of lions facing one another. The interior of the crown is made of brocade and silk, and there is a network of pearls in front of the crown, which may be the same as that of the emperors of the Central Plains.

A large number of objects displayed in Hangzhou exhibition all reflect the cultural exchanges between the East and the West unearthed on the Tuyuhun Road, such as Sassanian silver coins, with Roman-style gold belt, silver plates with Greek mythological elements, silk fabrics with statues of sun gods and so forth.

Qinghai in History
Qinghai has always been an important passage of the Silk Roads. It was developed very early, but its prosperity peaked in the 6th to 8th centuries, and it was called “Tuyuhun Road” in history. On the one hand, Tuyuhun had inseparable communication with the Eastern Central Plains because they are located in the East. On the other hand, they had direct interactions with the farther Central Asian countries, especially the Sogdians. The Sogdians mainly resided in the Zerafshan River basin, which in present-day, is Uzbekistan and Tajikistan. They were well-known for their business and handicrafts and history records that the Sogdians lived in the territory of Tuyuhun, probably in Qiemo, southern Taklamakan Desert. In the mural in the ambassador hall of the ancient Afrasiab ruins in Samarkand, among the envoys who came to congratulate King Varkhuman of Sogdian, three were from Tuyuhun according to research. The “Silk and Silk Roads: from Hangzhou to Samarkand”, was located just above the exhibition hall of the mural hall on the Afrasiab site of Samarkand State Museum-Reserve of Uzbekistan, vividly restores a grand event around 658-661 AD. At that time, Emperor Gaozong of Tang Dynasty Li Zhi (628-683) conferred the Sogdian king Varkhuman the governor of Samarkand and a large number of Tang Dynasty’s envoys went to Samarkand to deliver silkworm cocoons, silk threads, and fabrics, as well as envoys from Tuyuhun and neighboring Tashkent.

Significance Of The Archaeological Exhibition
As an archaeological exhibition, the China National Silk Museum not only restored the models of the Reshui Tomb No. 1 (Nine-layer Demon Tower) and Xuewei No. 1 Tomb in 2018 but also restored the original Quangou No. 1 Tomb under the guidance of Dr. Tao Tong. This tomb was excavated in 2018-19, and although it has been stolen, it is well preserved. It is a rectangular brick and wood mixed structure multi-chamber tomb with a tomb passage. The pillars, beams, and wood on the top of the room are painted with colors, and there are exquisite murals painted on the walls of the two rooms. It is the first tomb with murals in the Tubo period discovered on the Qinghai-Tibet Plateau. There are also painted lacquer coffins in the tomb and a sealed secret compartment was found in the tomb, in which a gilt crown and a gold cup were placed. This was a major archaeological discovery of the Tubo period on the Qinghai-Tibet Plateau in recent years and was selected as one of the “Top Ten New Archaeological Discoveries in China” by the National Cultural Heritage Administration of China in 2019 and the “Six New Archaeological Discoveries” by the Chinese Academy of Social Sciences. The excavation of this tomb is of great value for the study of the integration process of the Han and Tibetan and the grand cultural exchanges along the Qinghai Path.