CHANDIGARH, India, Oct. 1, 2021 /PRNewswire/ — India will launch 75 student-made satellites as a part of 75th Independence Day celebrations next year. This was announced by Prime Minister Narendra Modi during his recent UNGA speech. CU-SAT satellite, being designed and developed by the students of Chandigarh University, would be part the ambitious project and would be one of the 75 student-made satellites which would be launched in space on the eve of 75th Independence Day in 2022. This is was announced by Dean Academic Affairs (DAA), Chandigarh University, Dr. B. Priestly Shan during his virtual address in the 9th Indian Technology Congress. The 2–day 9th Indian Technology Congress (ITC-2022) on the theme ‘Satellites for Everyone and Space for Everyone‘ was jointly hosted by International Technology Congress Association and Chandigarh University. 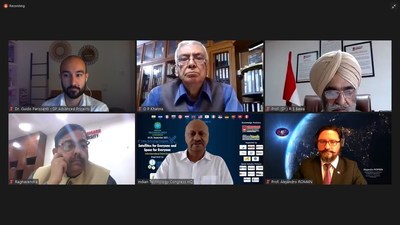 More than 36 eminent speakers from National & International space agencies and organizations across the globe including the United Kingdom, Japan, the United States of America, Germany, Italy, Israel, Portugal, France, Canada, Netherlands, Serbia, and Peru participated during the 2-day technology congress. Indian Technology Congress is the country’s largest conference in the field of satellite and space. More than 15,000 students and professionals from educational institutions, space agencies and manufacturing institutes from across the country and abroad participated in the virtual event.

During the event, Chandigarh University launched the CU-UNITYsat program, in which students and scientist from 75 countries would be participating. The program will introduce cutting-edge space & satellite applications and solutions, ushering in a ‘new space age’ for space development. DAA, Chandigarh University, Dr. B. Priestly Shan said, “The CU-UNITYsat program aims to impart knowledge on satellite and space technology and build a ground station and technology centre for the development of student satellites.” He further added that, “The program creates a sense of opportunity, inspiration and success in countries that are not able to be a part of the space program and launch a satellite into space. International Technology Congress Association announced the hosting of 10th edition of Indian Technology Congress at Chandigarh University in 2020 with theme ‘Pathways for Intelligent, Digitised and Sustainable Execution of Mega Projects.”

Addressing the virtual conference, Alejandro J. Roman Molinas said, “The whole world has realized the need to collect data through space technology for the challenges like corona pandemic crisis and climate change.” “Space technology is playing an important role in our daily life. There is an utmost need to set up infrastructure and invest in the field of space and technology,“ added Alejandro. “Over the years, Indian Technology Congress has emerged as a leading global think tank for technology, science and business think tanks working on implementing technological solutions to contemporary challenges,“ said Dr. Wooday P Krishna. Describing the conference as important, Dr. Wooday P Krishna said that this initiative will be important for achieving the Sustainable Development Goals of the United Nations by discussing the importance of satellites and Nanosatellites in future technologies. He further said that nano satellites will play an important role in making the world a technology power in future.

Speaking on the occasion, Padma Shree R.M Vasagam said, “The launch of Sputnik-1 in 1957 started a new Space Age in the space sector, which ushered a new political, security, technological and scientific development. Prior to this, there were no man-made satellites in space, but since its inception, thousands of satellites have been active in space orbit and student-made satellites are also playing an important role.” R.M Vasagam further said, “IoT based technologies are one of the emerging tools for the data collection globally, while nano satellites act as a guide in data collection.” “The cloud-based storage and cloud computing are important technologies for smooth functioning of ground stations. Massive advancement in the field of space & technology have proven to be instrumental in making things affordable, dynamic, and quality-oriented,“ added R.M Vasagam.

While talking about the role of satellites, Padma Shree Dr. YS Rajan said, “In the present era there is a need to develop new technology in the field of space and satellite keeping in view the increasing needs of the people.” Describing the UNITYsat program as historic, Dr. YS Rajan said, “The Indian Technology Congress program has proved to be a forum for network building and collaboration, where various academic institutions and national and international space agencies have exchanged ideas in the field of space and satellite.”