– “India amongst the elite group of nations in the arena of Space Technology,” says Moon Man of India, Dr. Mylswamy Annadurai 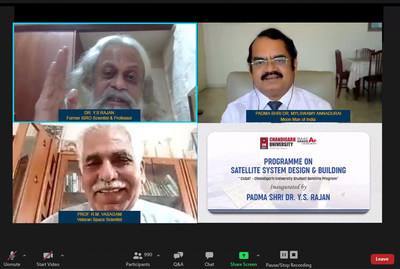 While giving details about the newly launched satellite designing program for the students, Chancellor Chandigarh University, Satnam Singh Sandhu said, “The first–of–its–kind training program in Satellite Designing and Testing would have a duration of 4-months and it would be open for the students of Computer Science Engineering, Electronics and Communication Engineering, Mechatronics, Aerospace Engineering, Mechanical Engineering, Electrical Engineering, and Geo-Informatics.” The training program would include study of Satellite Designing, Integration of Components, Testing and Simulation of launch process, collection & analysis of data from the satellite. “The students would undergo training under the guidance of former Indian and International Space Scientists including scientists from ISRO,” added Sandhu. Chandigarh University has planned to design and launch a multipurpose Nano-satellite within a period of 10-12 months which will be launched in space by ISRO.

While giving his inaugural address Dr. YS Rajan said, “Scientists from North India like Kalpana Chawla, Dr. Satish Dhawan have made big time contribution in the field of Space Technology and Exploration and therefore it is important to educate the young & budding engineers from this part of India about the rich legacy that they have in this field.” Dr. Rajan added, “It is not important that you design the whole satellite or mission. Designing and assembly of a small component plays an equal and important role in the success of a Space Mission. The first–of–its–kind training program introduced by Chandigarh University will play an important foundation in taking the interest of students of North India especially from Punjab towards the rewarding career in the field of Space Technology.”

While giving the keynote address, Dr. Mylswamy Annadurai also known as Moon Man of India said, “Russia and USA have maintained a lead for the past many decades in space exploration and space research and although India entered into the field much later yet India has carved out a special identity for itself in the International space program”. He further added, “The success of Chandrayan 1 and Mangalyaan missions have significantly positioned India amongst the top countries that have a great success rate in launching satellites and carried out experimental projects. The foundation of Indian space is so strong which can be verified by the fact that many missions of Russia and other nations took 5 or 6 attempts, but India has been successful in just one attempt in the Mangalyaan mission without any International help.” The success of Indian Space Research Program and ISRO has also opened new economic opportunities that can significantly contribute in the GDP of the country, added Dr. Annadurai. India has already helped countries like U.A.E, Singapore, Thailand, France, Spain, and others countries to launch their satellite which will help them in communication, navigation, and in other programs also.

“The training of young students should focus on apprising them with the real time problems that can be solved with the help of space technology. Satellite to be designed by Chandigarh University should focus on providing and collecting data which can be useful to tackle problems like Floods, Landslides, Draught Situation, and Underground Water Conservation. Addressing such real time situation through scientific approach should be the main objective of the satellite designing and training program launched by Chandigarh University,” said veteran space scientist, Prof. R.M.Vasagam.

“Chandigarh University has always focused on providing real-time industry exposure for its students where they can attain hands-on practical experience under the guidance of industry experts,” said Satnam Singh Sandhu, Chancellor, Chandigarh University. He further said, “Chandigarh University would be spending Rs. 1 crore for designing of Nano-satellite for which the training of students has already began. The establishment of ground control station for the satellite project is already underway and we are sure to design and launch our own multipurpose satellite within a time frame of 10-12 months.”

Chandigarh University is a NAAC A+ Grade University and an autonomous educational institution approved by UGC and is located near Chandigarh in the state of Punjab. It is the youngest university in India and the only private university in Punjab to be honored with A+ Grade by NAAC (National Assessment and Accreditation Council). CU offers more than 109 UG and PG programs in the field of engineering, management, pharmacy, law, architecture, journalism, animation, hotel management, commerce and others. It has been awarded as The University with Best Placements by WCRC.