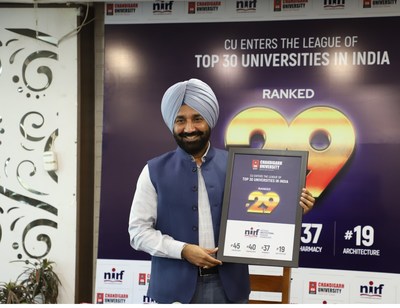 “Chandigarh University is not only the youngest but also the only university in the country to give consistently great performances in National and International rankings, such as QS world, QS Asia, NIRF or NAAC, and improving its position year after year,” said Sandhu, after the National Institutional Ranking Framework Rankings-2022 were released by the Union Ministry of Education, Government of India.

“This stellar performance of Chandigarh University in the NIRF rankings is a reflection of endorsement of the Varsity’s academic excellence and industry-training prowess from all stakeholders including industry, government and most importantly the students,” said Sandhu.

Noting that rankings are a great tool to assess the standards of an Educational Institution, ultimately helping the young minds to decide the best of institutions for their higher studies, Sandhu said, “The Varsity has laid emphasis on ensuring overall development of its students since its inception. It is the result of this pointed focus that we have been able to perform so well in every National & International Academic Rankings.”

“The Chandigarh University has long remained a preferred partner for Industry leaders and our students have been sought by the top businesses, thanks to the unparalleled quality education and industry-focused training they receive at over 30 Industry-sponsored Centres of Excellence and training centres established on our campus. This year so far, over 900 companies, highest for the whole of North India, have made more than 9500 job offers to our students, with the highest package of Rs 1.7 Crore, which speaks for our stellar placement records,” said Sandhu.

“We have filed 1816 patents so far, and are the leading stand-alone institution to file the highest number of patents in the last three years and we have academic tie-ups with 450 international universities in more than 80 countries,“ he added.

“With our excellent performance in all the aforementioned spheres, we have been able to become the youngest University to debut into QS World University Rankings-2023, and have secured a place among the top 800 institutions across the world.  Among all Indian Universities, Chandigarh University has grabbed an incredible overall 21st position, an impressive third position among Private Universities, and first spot in Punjab-Chandigarh region.

“Chandigarh University is also the youngest university to break into the QS Asia Universities Rankings-2022, debuting into a stellar 271-280 rank band and featuring among top 1.70% universities of Asia. We are also the youngest university in the country to get NAAC A+ grade, ranking amongst the Top 5% of the Higher Education Institutions of India and the only private university in the entire country to have NAAC A+ and NBA accreditation for all its engineering and MBA programs,” he added.

Proex, the Leading Multi-Contract Exchange, Secures MSB Licensing Across the U.S. and Canada