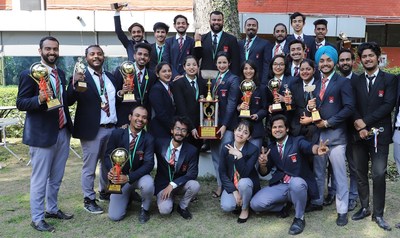 With this CU becomes the youngest university in the country to win this title. As many as 36 students from Chandigarh University, won overall trophy in Theatre & Fine arts and won 9 gold medals, 4 silver medals in different categories. Student teams from more than 93 universities all over India participated in the youth fest held at Noida. This was announced during a press conference at Chandigarh. Dr. A.S. Kang and Manish Jhangra from Department of Student Welfare, Chandigarh University were also present on the occasion.

Prior to this win, team Chandigarh University has shown glorious performance at National level youth festivals as the team bagged overall runners up position in 2019 while the theatre team of CU have created a national record by winning the overall theatre trophy consecutively for the fourth year.

Feeling delighted on the performance of team Chandigarh University, Vice Chancellor said, ”By winning the Overall Championship at 35th National Youth Festival 2020, university from Punjab has reclaimed their hands on the overall AIU trophy after a gap of 5 years. It is an honour to announce that Chandigarh University became first to bring overall National Championship trophy in Tricity.” As many as 93 university teams with 1600 participants from northern India took part in various contests of music, theatre, dance, literary and fine arts this year. Chandigarh University bagged the overall trophy by winning 9 first positions in one act play, skit, Mime, clay modelling, on-the-spot-photography, installation, procession, folk dance, collage making, and four 2nd positions in on-the-spot painting, poster making and vocal solo (western), Group song (western). It was on 3rd position in mimicry. Vice Chancellor announced that all the National Award winning performances will be exhibited in Tagore Theatre to the public of Tricity in the 3rd week of February.

Team of students comprising of Arunesh, Akash, Ankit, Yadhunandan, Ankita, Raghvendra, Sukant, Jaya and Saksham Singh won 1st  position in the One Act Play  ‘Kashima’, showcased the story of the girls who face atrocities and been killed. 1st positioned Mime titled ‘Honor Killing’ enacted on social issue prevalent in patriarchal society. In both performances, woman’s’ struggle for survival has been presented. 1st positioned skit was based on an idea of today’s world where everyone is talking about women empowerment and equal rights, there are men too who go through various mental and emotional traumas. In total, Chandigarh University won 9 first positions in one act play, skit, mime, clay modelling, on-the-spot-photography, installation, procession, folk dance, collage making while 4 second positions in on-the-spot painting, poster making and vocal solo (western), group song (western).

Aimed to promote new talent, Chandigarh University mentor students as all-rounder to render holistic development. It also provides competent Directors and artists who organize workshops and conferences to train the students in the field of art and culture so that they can compete at various international and nation championships.

Chandigarh University is a NAAC A+ Grade University and an autonomous educational institution approved by UGC and is located near Chandigarh in the state of Punjab. It is the youngest university in India and the only private university in Punjab to be honored with A+ Grade by NAAC (National Assessment and Accreditation Council). CU offers more than 109 UG and PG programs in the field of engineering, management, pharmacy, law, architecture, journalism, animation, hotel management, commerce and others. It has been awarded as The University with Best Placements by WCRC.