PARIS, Nov. 7, 2019 /PRNewswire/ — Champagne Bollinger today hosted an event at the Hôtel de Crillon, to mark the 40th anniversary of their partnership with 007. 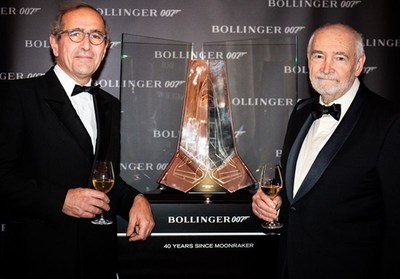 To celebrate this landmark anniversary, guest of honour Michael G. Wilson, producer of the James Bond films, was joined by an exclusive list of invitees. The evening paid tribute to the shared history of the two brands dating back to 1979, when Champagne Bollinger become the Official Champagne of Britain’s most famous secret agent upon the release of Moonraker. Commenting on the anniversary, Michael G. Wilson & Barbara Broccoli producers of the James Bond films proudly stated that the relationship is: “One of the great partnerships in cinema – forty years and counting”.

The occasion was marked with the global product launch of the ‘The Moonraker Luxury Limited Edition’, the latest product offering from Champagne Bollinger to commemorate the 40 year partnership. Guests in attendance were treated to the first taste of this 2007 vintage, set to a backdrop of a Moonraker image retrospective including sketches of the iconic space shuttle, created by legendary production designer Sir Ken Adam, which inspired the design of the latest collectors item.

Images of the event and historical association are available here.

Champagne Bollinger: Eminent, distinctive, and distinguished fine wines of Champagne since 1829. Guaranteed through the integrity of a resolutely independent family house in Aÿ and through the artisanal know-how of people dedicated to growing and blending excellence. Devotion extending beyond the wines to support a sustainable environment and integration with local communities.

EON Productions Limited and Danjaq LLC are wholly owned and controlled by the Broccoli/Wilson family. Danjaq is the US based company that co-owns, with Metro Goldwyn Mayer Studios, the copyright in the existing James Bond films and controls the right to produce future James Bond films. EON Productions, an affiliate of Danjaq, is the UK based production company that has made the James Bond films since 1962 and together with Danjaq controls all worldwide merchandising. The twenty-fifth 007 film is currently in production. For more information, visit www.007.com.

The Moonraker Luxury Limited Edition: Moonraker, released forty years ago, featured James Bond whose mission took him on an outer space adventure.  It was also the movie on which the Bond and Bollinger partnership began. To celebrate their 40 year partnership, Champagne Bollinger and 007 pay tribute to their shared heritage and revisit the space shuttle created by legendary production designer Sir Ken Adam. Champagne Bollinger enlisted designer Eric Berthes to re-imagine the Moonraker space shuttle. Crafted from pewter and wood veneer, encasing a Saint Louis crystal ice bucket and a magnum of Bollinger 2007, the Bond vintage par excellence. Each numbered piece has been crafted and finished by hand, making it unique. Limited edition of 407 copies. RRP £4,500.