BEIJING, May 14, 2021 /PRNewswire/ — Crises are an unavoidable part of human history. And the response to a crisis can make a difference in a country’s development. 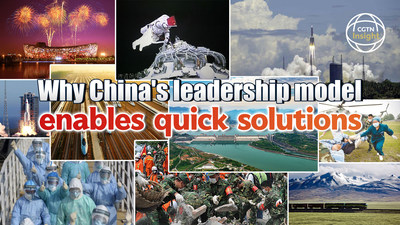 On May 12, 2008, a major earthquake jolted Wenchuan, a county of Sichuan Province in southwest China. The government’s speed in responding then amazed the world.

About 10 minutes after the disaster hit, China’s emergency response office issued a statement on the situation from Beijing, and the People’s Liberation Army (PLA) activated its preparedness plan.

Just 21 minutes after the quake, four helicopters were dispatched to survey the damage, and 6,100 officers and soldiers from neighboring areas and over 3,000 members of the Sichuan Armed Police Force deployed to the scene.

In less than 10 hours, 20,000 troops and armed police were at the disaster sites assisting with relief work, with an additional 34,000 security officers on their way.

The speed at which a government reacts to disasters speaks to its capacity to solve problems and its resilience.

COVID-19 has provided another stern test.

In the early stages of the outbreak, Wuhan in Hubei Province was in dire need of medics and equipment. The government rushed more than 330 medical teams comprising over 40,000 healthcare workers to the city.

Nineteen provinces were corralled to provide direct assistance to other surrounding provincial communities.

At first, the lockdown of Wuhan elicited confusion and even panic.

But the government provided timely updates and addressed the challenges that came with lockdown through grassroots community actions mobilized by local authorities.

In doing so, the spread of the virus was curbed and social stability maintained.

“I have never seen, in my life, this kind of mobilization,” said World Health Organization Director-General Tedros Adhanom. “China’s speed, China’s scale and China’s efficiency… is the advantage of China’s system.”

Not only did the government work on measures to tame COVID-19, but it also charted a 15-year socio-economic development blueprint.

China has proved itself adept at turning crises into opportunities.

“Roots of China’s Growth” is a 10-episode series marking the centenary of the founding of the Communist Party of China (CPC), which has presided over the country’s meteoric rise as a global power. The series focuses on 10 fundamental elements of the strategy that has led to China’s transformation from an impoverished nation over the past 100 years. This article is the first in the series.