BEIJING, April 28, 2021 /PRNewswire/ — In the eyes of some Western politicians and media who may have never been to Xinjiang, the region resembles an “evil” place where ethnic minorities are suffering from “genocide,” “forced labor,” and other severe crimes against humanity.

But as more international delegations take trips to Xinjiang to see the region for themselves, a different narrative has emerged. According to the Chinese Ministry of Foreign Affairs, over the past years, more than 1,200 diplomats, journalists, and religious personnel from over 100 countries have visited Xinjiang. They saw the region with their eyes, realizing that what they witnessed was different from some Western media reports.

The discussion took place in a Chinese-style opera house in central Beijing. Liu Xin just wrapped up a two-week trip to Xinjiang, where she interviewed many local officials, academics, farmers, and local residents. 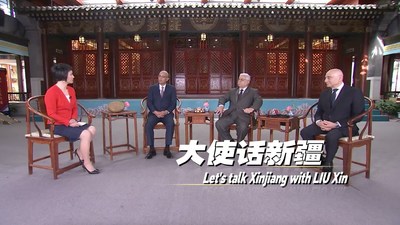 Xinjiang in the eyes of ambassadors

Pakistani Ambassador to China Moin ul Haque visited Xinjiang this March. He described this trip as “an experience of a lifetime.” After visiting various places, including local families, development projects, and mosques, he was attracted by the cultural and religious diversity and harmony in this region. Instead of the so-called “forced sterilization” imposed on ethnic minorities, which some Western “researchers” claim, he said “Xinjiang is a mosaic of 50-plus ethnic minorities, and these ethnic minorities exist in Xinjiang in a very peaceful and harmonious manner.”

Fariz Mehdawi, Palestinian Ambassador to China, was impressed by the number of religious places. He visited Xinjiang in 2020 and observed that there were mosques in intersections wherever he looked, and there were five mosques actually in the same neighborhood, and a specialized religious learning institution had been established too.

Some people argue that these diplomats’ tours are all staged and do not reflect the real situation. Ambassador Fariz said he thinks such an opinion is not respectful. “One should not believe that diplomats are so naive that they could be maneuvered to take and buy anything,” he argued, adding “the diplomats are not part of a conspiracy, that they would justify something against what they had seen.”

In the past, Xinjiang suffered from “the three evil forces”: separatism, extremism, and terrorism. But thanks to China’s efforts, there have not been any terrorist attacks in Xinjiang for more than four consecutive years.

The reason behind this, the ambassadors said, is that Chinese authorities have done two right things: one is eradicating hardcore terrorists with force, and the other is the emphasis on people and developing the society.

Syrian Ambassador to China Imad Moustapha told Liu Xin that China is doing the right thing. China went to the core issues, which are how to develop the society and how to prevent the people in Xinjiang from falling prey to the propaganda of radical extremism.

Why has Xinjiang become such a controversial topic?

The contrast between the ambassadors’ personal experiences and the narratives of the Western world is stark. Why?

Fariz Mehdawi, Palestinian Ambassador to China, explained that it is not about human rights; it is about geopolitical challenges.

Syrian Ambassador to China Imad Moustapha said, “let’s look at the issues as they are. The issues have nothing to do with Xinjiang. It has to do with the media campaign in the West against China, demonizing China. China is bad. And whatever China does, it’s bad.”

The ambassadors expressed hope that China could stay the course, continue its development path, continue opening up, continue to reform, continue the people-centric approach. They agreed that Xinjiang is a beautiful ancient land of diverse people who have hopes and inspirations.

The ambassadors’ views do not represent the views of all countries, however. Since February 2021, the governments of Canada, the Netherlands, and the UK have passed non-binding motions declaring China’s conduct in Xinjiang amounts to genocide. The U.S. State Department labeled China’s actions in Xinjiang genocide in its 2020 Country Reports on Human Rights Practices released in March. China has strongly rejected such allegations.