BEIJING, Dec. 12, 2021 /PRNewswire/ — When America launched combat operations in Afghanistan in the wake of the 9/11 attacks, public support for the decision ran as high as 93 percent. Fast-forward to today and the war’s enormous human and financial costs have caused a substantial shift in American public opinion. According to a Gallup poll conducted just before the final withdrawal, 47 percent now believe the invasion was a mistake. 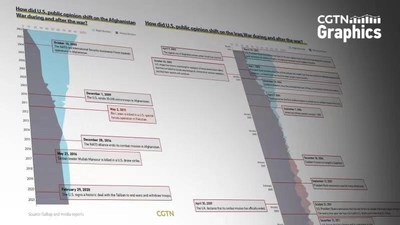 Over the past two decades, the numbers have fluctuated, though most were still generally positive toward U.S. operations in Afghanistan. An even split was seen for the first time in 2014, with tilts into opposition in 2015 and 2019. 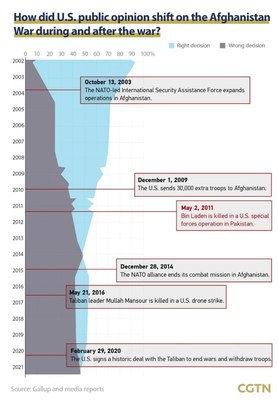 According to the Costs of War Project conducted by the Watson Institute at Brown University, the war has caused 46,319 civilian deaths. The New York Times has reported that in the first half of 2019 alone, U.S. bombs led to 363 confirmed deaths, including 89 children.

U.S. Defense Department data show that at one point, 98,000 U.S. troops and more than 130,000 soldiers from 50 NATO and partner nations were deployed in the country. Military expenses since 2001 exceed $2.26 trillion. 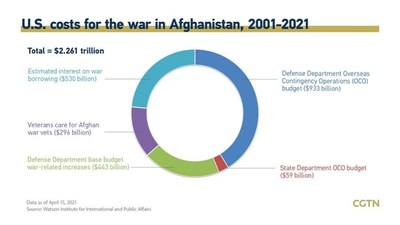 In 2003, the Bush administration claimed that Iraq was hiding weapons of mass destruction in order to justify its illegal invasion despite international opposition, and since that time, according to a report by the China Society for Human Rights Studies (CSHRS), U.S.-led coalition forces have used untold numbers of myriad varieties of bombs and shells that spread white phosphorus and depleted uranium, which the U.S. Environmental Protection Agency lists as both a toxic chemical and radiation health hazard. To this day, the United Nations estimates that 25 million mines and other unexploded ordnance remain. 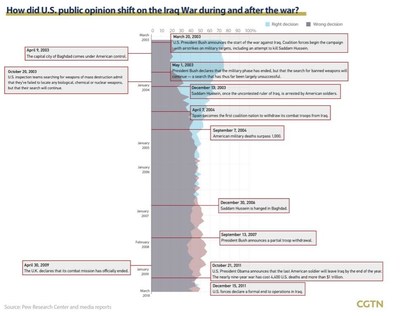 The U.S. has repeatedly waged aggressive wars and rationalized invasion with supposed humanitarian justifications. Between the end of World War II and 9/11, the U.S. initiated 201 of 248 armed conflicts worldwide (81 percent), according to the CSHRS report.

CGTN: In America, paying taxes is optional if you're a billionaire