BANGALORE, India, Feb. 10, 2022 /PRNewswire/ — It’s always a delight when movie campaigns try something unique to promote a film, and the makers of “Moonfall” have all the right ideas to spread the word in a creative way. 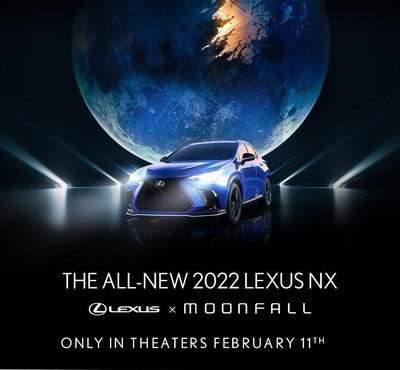 The Halle Berry starrer’s latest promotional campaign marks a grand collaboration with one of the world’s most loved luxury automobile brands. Lexus, a name with its philosophy of transforming function to emotion, performance to passion and technology to imagination, is now officially a brand partner with “Moonfall”. The Roland Emmerich directorial also sees actor Michael Peña in the role of a Lexus dealer, integrating the brand right into the film’s central plot.

“Moonfall” tells the tale of one dreaded day when the moon sets on a collision course with earth, threatening to destroy the whole world. As apocalypse approaches, the fate of mankind is left to the hands of three brave experts who go to hell and back to save the planet. The film features Patrick Wilson and John Bradley.

The all-new Lexus NX living up to its bold image; plays a pivotal role in a heroic effort to restore order and put the Moon back in its orbit with the mission to save the world. The second generation of the luxury SUV Lexus NX, is coming to India soon and is set to open the next chapter for the Lexus brand in India

Mr. Kamal Giachandani, CEO – PVR Pictures further added saying, “Both Moonfall and Lexus epitomize a grand and glorious ride. While the movie is an edge-of-the-seat Sci-Fi adventure, Lexus has always been known for its exhilarating performance & imaginative technology while producing magnificent cars. PVR Pictures is glad to be bringing this breath-taking spectacle to Indian cinemas. PVR continues to maintain stringent hygiene protocols and measures mandated by the Government and even going beyond them and consistently deliver the same memorable moments to moviegoers in the post-pandemic world.”

Speaking on the occasion, Mr. Naveen Soni, President-Lexus India commented, “We are eagerly waiting to launch the all new NX soon and the guest confidence shown on us through the pre-bookings so far; has been overwhelming. Lexus – Moonfall collaboration will further accelerate the amount of excitement among Lexus fans across India. We are excited to present the movie as the all-new Lexus NX is playing a crucial role in the movie. PVR pictures is premiering it across their screens in India, which will help us reach a wider audience too. We wish the movie and the all New Lexus NX a phenomenal success.”

In “Moonfall,” a mysterious force knocks the Moon from its orbit around Earth and sends it hurtling on a collision course with life as we know it. With mere weeks before impact and the world on the brink of annihilation, NASA executive and former astronaut Jo Fowler (Academy Award® winner Halle Berry) is convinced she has the key to saving us all – but only one astronaut from her past, Brian Harper (Patrick Wilson, “Midway”) and a conspiracy theorist K.C. Houseman (John Bradley, “Game of Thrones”) believe her. These unlikely heroes will mount an impossible last-ditch mission into space, leaving behind everyone they love, only to find out that our Moon is not what we think it is.

PVR Pictures is the motion picture arm of PVR Limited, one of the largest cinema exhibition company in the country, with 855 screens at 178 cinema properties in 71 cities in India and Sri Lanka. PVR Pictures is the largest distributor of Independent foreign language films in India. The company is a prolific distributor of Indian films as well. Over 500+ Hollywood, 200+ Hindi, and 100+ regional films across a multiplicity of genres have been released under its illustrious banner since 2002. Some of the recent releases by PVR Pictures include 2021 Oscar nominee Minari, The Father along with movies like The Courier, The Mauritanian, The Green Knight, Gunpowder Milkshake, and Anime movies such as Demon Slayer Kimetsu No Yaiba The Movie: Mugen Train.

Lexus launched in 1989 with a flagship sedan and a guest experience that helped define the premium automotive industry. In 1998, Lexus introduced the luxury crossover category with the launch of the Lexus RX. The luxury hybrid sales leader, Lexus delivered the world’s first luxury hybrid and has since sold over 2 million hybrid vehicles. Since its debut in India in March 2017, Lexus has aimed to craft a better tomorrow and redefine luxury in the world’s fastest-growing major economy. The brand strives to consistently deliver exceptional design and quality to the discerning Indian guest with a portfolio of 6 vehicles, 5 of which are self-charging hybrid electric vehicles. In 2020, Lexus’ presence in the Indian market was further strengthened with the introduction of its first locally produced model, ES 300h. A global luxury automotive brand with an unwavering commitment to bold, uncompromising design, exceptional craftsmanship, and exhilarating performance, Lexus has developed its line-up to meet the needs of the next generation of global luxury guests and is currently available in over 90 countries worldwide. Lexus associates/team members across the world are dedicated to crafting amazing experiences that are uniquely Lexus, and that excite and change the world.