GUANGZHOU, China, May 30, 2019 /PRNewswire/ — The recently-closed 125th China Import and Export Fair (Canton Fair or “the Fair”) experienced an increase of the trade volume from the countries in the Belt and Road Initiative (BRI) of 9.9 percent, reaching USD 10.63 billion. Trade between BRI countries and China at the 125th Fair accounted for 35.8 percent of the total turnover. Buyers from BRI countries also increased by 0.5 percent with new buyers growing by 0.94 percent.

Xu Bing, Spokesperson of the Canton Fair and Deputy Director General of China Foreign Trade Centre, said, “Canton Fair has increased promotion in countries and regions along the BRI route, as trade connections are important to promoting business cooperation.” Xu added, “The average number of buyers from BRI countries reached 80,000, accounting for 45 percent of the total amount. 8,198 exhibitors from BRI countries exhibited their products at Canton Fair; the largest group in the Fair’s History.” 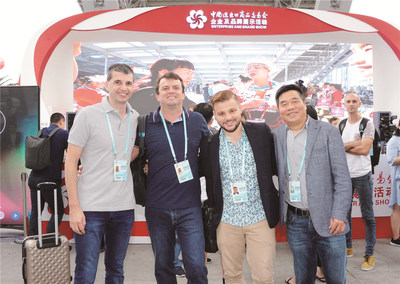 Li Kuiwen, Director of the Department of Analysis, Chinese General Administration of Customs, noted that Chinese trade companies, having consolidated their presence in the domestic market, are now expanding into emerging markets along the BRI route. In the first four months of 2019 alone, the import and export trade volume between China and BRI countries reached CNY 2.73 trillion (USD 394,921 billion), a year-on-year increase of 9.1 percent.

The increase in the number of buyers at the Canton Fair from BRI countries reflects this rise. Buyers from Thailand, Malaysia, Vietnam, Singapore and Cambodia increased by 10.75, 9.08, 23.71, 4.4 and 8.83 percent respectively. Russia has also seen an increase of buyers to the Canton Fair by 1.29 percent.

Canton Fair and the expansion of global business

The Canton Fair has helped improve business cooperation between China and BRI countries by introducing its Global Partnership Program. The Fair has now established strategic partnerships with 48 industrial and commercial organizations in 32 BRI countries, working together on promotion, exhibition, visits and information service. The effect has been a boost in economic and trade cooperation along the BRI, with partnerships expected to cover the entire BRI area in the next 2 to 3 years.

Taymour M. Essam, International Exhibitions Project Manager at the Export Development Authority, Egypt, said that Canton Fair had attracted not only big names in Egypt but also small and medium-sized enterprises to test their product in the international market.

“Canton Fair is one of the largest fairs in the world. This year, 9 Egyptian companies at this year’s fair took advantage of this status to meet clients from Africa and Latin America and have established a relationship with the global network as a result,” said Essam.