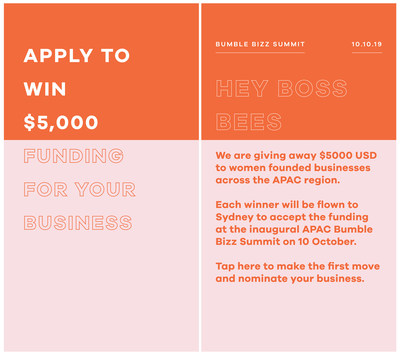 The competition will run in Australia, Hong Kong, India, New Zealand, the Philippines and Singapore, the six APAC markets in which Bumble currently operates, with one winner chosen from each country.

The announcement is followed by Bumble’s major milestone of Indian women making the first move over three million times and are sending twice as many messages as women in the rest of the world. The number of women on Bumble in India has grown more than 2x faster than men since the launch.

“Innovation and creativity play a vital role in the community. For us at Bumble, this is about providing opportunities for women entrepreneurs to pitch their best ideas, and we’ll help support them by opening more pathways to success, while also encouraging them to make the first move with their business ventures,” said  Priti Joshi, Vice President of Strategy at Bumble.

The grant recipients will be flown to Sydney to participate in the inaugural APAC Bumble Bizz Summit, featuring some of the world’s most inspiring women including Malini Agarwal (founder of MissMalini Entertainment).

“I am so excited to be participating in the Bizz Summit with Bumble. I know how challenging it can be to start your own business and raise capital in the early days. I am excited that women today have access to something like Bumble Bizz that can help startups make those key connections that can lead to huge opportunities,” said Agarwal.

Bumble is the first app of its kind to bring dating, friend-finding, and career-building to a single platform via Bumble Date, Bumble BFF and Bumble Bizz. Bumble is rooted in encouraging empowering connections, respectful conversations and meaningful interactions. Since its launch, Bumble has amassed over 66 million registered users in more than 150 countries. This has led to over 1.1 billion women-led first moves and over 4 billion messages sent worldwide.

Bumble, the women-first social networking platform, founded by CEO Whitney Wolfe Herd in 2014, is a subsidiary of MagicLab, the group of dating apps founded by Andrey Andreev (also including Badoo, Lumen and Chappy.) Bumble is built and owned by MagicLab and its founding team. With over 65 million users, Bumble connects people across dating, friendship, and professional networking. No matter the type of relationship, women make the first move on Bumble. Bumble recognizes the importance of relationships and how crucial they are to a healthy, happy life. They’ve built their platform around kindness, respect, and equality – and their users play an important part in that. Bumble holds its users accountable for their actions and has zero tolerance for hate, aggression or bullying. Bumble is available in 150 countries. Since 2014, Bumble has facilitated over a billion women-led first moves and over ten billion messages sent. Bumble is free and available in the App Store and Google Play.