NEW YORK, Oct. 14, 2020 /PRNewswire/ — Budweiser announces a partnership with chart topping, multi-platinum, Grammy nominated singer/songwriter and social activist, Halsey, unveiling a new film titled: “Make Your Name – Be a King.” The globally recognized talent stars in the film highlighting her amazing story of self-belief in rising from New Jersey teenager Ashley Frangipane to award winning musician Halsey. Fueled by her ambition, the film shows her journey to overcome adversity by finding the inspiration for both her music and her stage name. 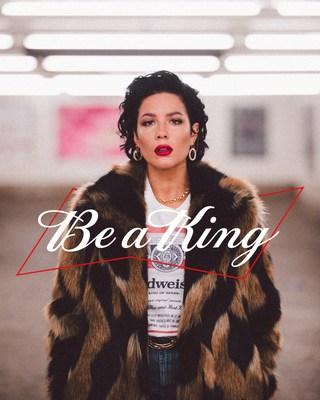 “Make Your Name – Be a King” follows her metamorphosis from Ashley to Halsey, bringing the viewer on an emotional journey as she relentlessly pursues her path to stardom. Through never-before-heard poetry, Halsey describes how Ashley found inspiration from daily subway rides and ultimately adopting her stage name from the Halsey station stop on the New York City subway.  Armed with only determination, dreams and a pen, Halsey’s attitude and self-belief enabled her to step up and find success to be crowned a global King of music.

“I was so honored Budweiser found my story compelling enough to recreate in such vivid detail. New York City often felt like a kingdom in itself. My days tucked away writing music in the underbelly of New York often felt bleak and hopeless, but they were colored with the fantasy of one day exploring the magnitude of it all and dominating it in my own way. I wrote songs on the subway that I later performed on a sold-out stage at Madison Square Garden and it was in this moment I truly felt like a King, in this once ungraspable city,” said Halsey. “I wrote the poem accompanying the film to tell my younger self to save up all of her rage and excitement and confusion because one day, on that stage at MSG, I would feel it all explode and burst forth from me. I would finally be a king in the city where I made my name.”

As part of the global campaign, Budweiser and Halsey are collaborating on limited-edition merchandise. Designed by Halsey and her team, the apparel collection encourages fans to celebrate the King mentality. Fans can pre-order the collection at halseymusicstore.com with all profits going to the National Alliance to End Homelessness.

“Budweiser is focused on celebrating stories of ambition which inspire our consumers to step up and Be a King. This attitude to life has been ingrained in Budweiser since Adolphus Busch came to the US with the dream of creating the King of Beers,” said Steve Arkley, Budweiser Global VP. “Halsey embodies this same self-belief with an incredible true story of overcoming challenges to make her own name.”

Halsey also released an original spoken word poetry entitled “Becoming a King” which shares her powerful perspective on ‘finding her motivation in the lights and name in the signs’.

The partnership first kicked off Halsey’s Super Bowl concert in Miami at the BUDX Hotel and follows Budweiser’s recent partnerships with Sergio Ramos and Lionel Messi.

About Anheuser-Busch InBev and Budweiser
Anheuser-Busch InBev is a publicly traded company (Euronext: ABI) based in Leuven, Belgium, with secondary listings on the Mexico (MEXBOL: ANB) and South Africa (JSE: ANH) stock exchanges and with American Depositary Receipts on the New York Stock Exchange (NYSE: BUD). Our Dream is to bring people together for a better world. Beer, the original social network, has been bringing people together for thousands of years. We are committed to building great brands that stand the test of time and to brewing the best beers using the finest natural ingredients. Our diverse portfolio of well over 500 beer brands includes global brands Budweiser®, Corona® and Stella Artois®; multi-country brands Beck’s®, Hoegaarden®, Leffe® and Michelob Ultra®; and local champions such as Aguila®, Antarctica®, Bud Light®, Brahma®, Cass®, Castle®, Castle Lite®, Cristal®, Harbin®, Jupiler®, Modelo Especial®, Quilmes®, Victoria®, Sedrin®, and Skol®. Our brewing heritage dates back more than 600 years, spanning continents and generations. From our European roots at the Den Hoorn brewery in Leuven, Belgium. To the pioneering spirit of the Anheuser & Co brewery in St. Louis, US. To the creation of the Castle Brewery in South Africa during the Johannesburg gold rush. To Bohemia, the first brewery in Brazil. Geographically diversified with a balanced exposure to developed and developing markets, we leverage the collective strengths of approximately 170,000 employees based in nearly 50 countries worldwide. For 2019, AB InBev’s reported revenue was 52.3 billion USD (excluding JVs and associates).

Budweiser, The King of Beers, is a medium-bodied, flavorful, crisp American-style lager. Brewed with the best barley malt and a blend of premium hop varieties, Budweiser is an icon of optimism and celebration which is enjoyed in over 60 countries around the world and is committed to brewing every Budweiser with 100% renewable energy by 2025.

The Age of Nesting is here: Beko's new report explores long-term impact of global lockdowns on the home