LOS ANGELES, May 10, 2019 /PRNewswire/ — Netmarble Corp. has announced that its highly anticipated mobile game BTS WORLD will be available for pre-registration starting May 9 PST/May 10 KST [https://btsw.netmarble.com]. 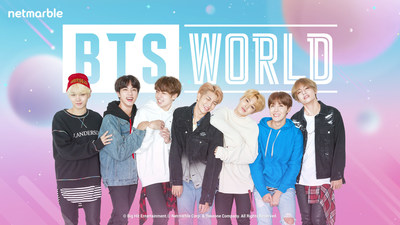 Created in conjunction with the global superstars, BTS WORLD is a story-based mobile simulation game that takes players on an interactive journey. “BTS WORLD was developed with the players in mind from the very beginning,” said Seungwon Lee, Chief Global Officer of Netmarble. “Not only do they get to experience something entirely different, but they’re also getting access to a tremendous amount of new and exciting content we created with BTS specifically for the game.”

BTS WORLD includes an exclusive 10,000 brand new photos, and 100 exclusive video clips. BTS WORLD also brings players closer than ever to the group, allowing them to virtually interact with members through a 1:1 interactive system.

The pre-registration site will also give players a first look at BTS WORLD, including a game introduction, a BTS story, and “From BTS” – a special sneak peek of the game’s “mobile function” that lets players interact virtually with group members. In addition, the site will feature a mini game, pairing players with the member they match with best as a manager through a short series of questions.

The game will be released worldwide for iOS and Android devices. Stay tuned for the official launch date for BTS WORLD.  For more information on BTS WORLD, please visit [https://btsw.netmarble.com] or the BTS WORLD site. The latest updates are also available by following BTS WORLD on Twitter.

About Netmarble Corporation
Netmarble Corp. strives to entertain audiences of all ages around the world by providing great mobile gaming experiences. Established in Korea in 2000, Netmarble is the fastest-growing mobile game company and consistently ranks as a top mobile developer and publisher worldwide. With more than 5,500 employees, Netmarble has been producing and servicing some of the most successful mobile games including Lineage 2: Revolution, MARVEL Future Fight, Everybody’s Marble, and Seven Knights. As a parent company to Kabam, a top mobile game developer in massively multiplayer free-to-play games, and the largest shareholder to Jam City, a leading casual social game developer, Netmarble has a strategic partnership with CJ ENM Corporation, Asia’s largest entertainment company, Tencent Holdings, Asia’s largest internet company, and NCsoft, a prominent MMORPG company. More information can be found at www.netmarble.com.

About Big Hit Entertainment
Founded in February 2005 in South Korea by CEO and Producer Bang Si-Hyuk, Big Hit Entertainment’s core business focuses on music production, artist management and publishing. Big Hit’s business ventures incorporate and develop a range of content produced from top-notch artists’ IP, including global boyband BTS and its newest addition TOMORROW X TOGETHER. With its mission of ‘Music & Artist for Healing’, Big Hit strives to impart a positive influence through content while providing comfort and inspiration to music fans worldwide.

TurningLife Constructing a Better Life, One Brick at a Time