Borussia Dortmund and Leading Online Forex Trading Company, InstaForex, Today Announce a Two-year Partnership That Will Run Until the End of the 2020-21 Season

DORTMUND, Germany, Sept. 5, 2019 /PRNewswire/ — InstaForex, will become an official partner of the club in Asia and the Commonwealth of Independent States (CIS). The partnership incorporates a significant range of assets including the use of new technology that sees Instaforex messages regionally broadcast via digital billboards to Asian markets at several Bundesliga home matches. 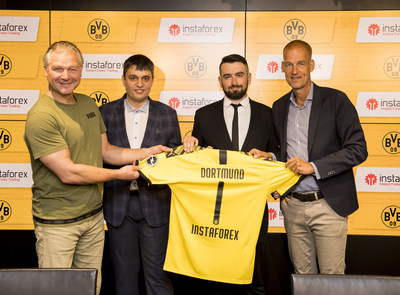 The alliance will also see InstaForex offer exciting Borussia experiences to customers who are fans in these markets, including tickets to see the “Black and Yellows” play at home at Germany’s largest football stadium, “SIGNAL IDUNA PARK”. Moreover it will give a chance to Asian customers of InstaForex to get closer to Borussia without leaving their country by meeting Borussia legends, becoming a part of Borussia’s Asian tour 2020 etc.

Commenting on the new partnership, Ildar Sharipov, the founder and president of InstaForex said: “At the moment InstaForex is not only a broker but rather an IT company, investing heavily to technology and striving to offer the customers new innovative products on a regular basis. It’s well known that IT plays a very significant role in football too, so we’re looking not only for a leading team but also for technology enthusiasts in football which are a perfect match to our business philosophy. For these reasons it was a natural choice to align with such a team as Borussia Dortmund. We look forward to working with the club to further develop our respective brands in the markets of Asia and CIS.”

The InstaForex delegation were welcomed to the SIGNAL IDUNA PARK by the COO of Borussia Dortmund, Carsten Cramer and BVB legend player Wolfgang “Teddy” de Beer. Further welcoming of the new partnership is BVB Head of Asia, Suresh Letchmanan who comments: “We are very pleased to have secured Instaforex as a partner of Borussia Dortmund. The partnership with the leading online Forex trading company is a win for all sides – especially the fans in the markets of Asia and CIS who can look forward to many exciting activities with the BVB.”

In its eleventh successful year of operations, Instaforex continues to push the boundaries of success and confirm its number one positioning. The broker’s history of profile sponsorships in sport around the world have included Premier League team Liverpool FC and FormulaE team Dragon Racing. An award-winning business in every year since launch, Instaforex has won in such categories as the Best Broker in Asia, Best Broker in Eastern Europe, Best Retail Forex Broker, Best Broker in CIS and many others.  To learn more about the new partnership with Borussia Dortmund please visit instaforex.com/borussia