SINGAPORE, Jan. 9, 2020 /PRNewswire/ — Bigo Live, the live streaming platform based in Singapore is slated to release exciting footage of some of their popular broadcasters in New York Times Square on 7 January 2020. The footage will feature snippets of how the lives of ordinary people have been transformed based on the power of new age communication; simply by sharing a slice of life during their live streams or broadcasts. 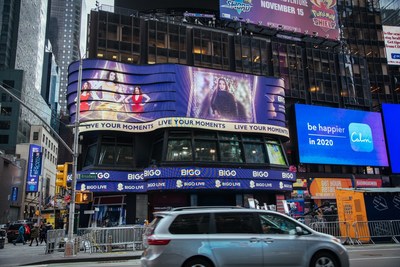 The release of this new footage is a prelude to the upcoming BIGO Gala Awards 2020, held in Singapore; an inaugural ceremony where the platform’s best and brightest are celebrated. Some of the featured broadcasters from the Times Square footage will be descending unto the little red dot to receive their trophies and to perform in front of a global audience.

Bigo Live has been known to drastically better the lives of their broadcasters who claimed that they were sceptical at the beginning. Now, however, these same ordinary individuals have gained not only popularity, a faithful following of hundreds of thousands, they have also been given an outlet to share their craft, showcase their talent or passion, make friends on a global scale, a feat that was not possible before.

Sharing on the video shown in Times Square, Broadcasters shared that they were grateful to Bigo Live for providing them with an outlet to be creative, passionate, and to enjoy fame while earning an income all at the same time.

This social media evolution has not only given rise to a new generation of online stars, but has also created a world where info-tainment is consumed based on mobility and accessibility. In this area, Bigo Live’s successful creation of a global talent base that is both local and global is not only unique, but proving to be quite a popular choice for many Gen Y’s and Z’s.

People who are interested can catch the full ceremony in app, on 15 January, GMT +8 on Bigo Live.

Bigo Live is available on both android and iOS.