The solar plant, which is already in operation, is located in the commune of María Elena, Antofagasta Region, Chile and was built with bifacial technology. The plant has a total capacity of 244 MWp and will provide clean energy to the grid. It has a long-term power purchase agreement with Engie Energía Chile. The project will contribute to the goals of the Chilean government’s decarbonization plan.

SANTIAGO, Chile, March 22, 2022 /PRNewswire/ — Atlas Renewable Energy marks a new milestone on the road to the implementation of clean energy in Chile, with the operation of one of the largest solar plants in the country. Sol del Desierto is located in the commune of María Elena, Antofagasta Region, and has a total capacity of 244 MWp. With 582,930 solar panels spread over 479 hectares, the plant will generate 714 GWh annually. The solar project is an important part of Chile’s Ministry of Energy’s decarbonization plan, which seeks to retire and/or convert half of the coal-fired power plants by 2025. 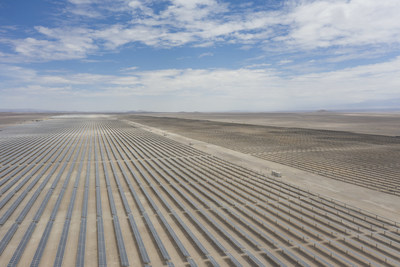 The project, which has already started operations, has a long-term solar power purchase agreement (PPA) between Atlas Renewable Energy and Engie Energía Chile, agreeing to supply 550 GWh/year of solar photovoltaic energy for a period of 15 years. The plant’s generation enables the supply of clean energy to 345,198 homes.

Sol del Desierto will avoid 368 thousand tons of carbon dioxide, which is equivalent to taking more than 47 thousand vehicles out of circulation per year. The solar park also stands out for its efficiency. It was developed with bifacial technology, which allows energy to be obtained from the back and front faces of each of its solar modules.

An innovative project at an international level

The company’s general manager for Chile, Alfredo Solar, explains that “at Atlas Renewable Energy we develop our projects with a strong commitment to the environment, the surroundings, and to inclusion. That is why Sol del Desierto stands out not only for its contribution to clean energy but also for the care of the surrounding nature, the conservation of archaeological sites, and above all for having placed special focus on the inclusion of female workforce in its construction”.

Thus, the development of the plant fostered social and environmental responsibility programs, especially highlighting the work of Atlas and its employees with the community of Maria Elena, through various initiatives aimed at promoting diversity, inclusion, and local participation in the project.

One of the most outstanding projects was the “We are part of the same energy” program, which provided technical skills training in the assembly of solar modules and electricity to 66 women neighbors of the commune so that they could have access to opt for jobs within the construction of the plant as well as for other projects being built in the area. Thanks to this program, to which the contractors participated in, the construction of Sol del Desierto was able to add 135 women in different operational and supervisory jobs, elevating female representation in the construction of a solar project from a traditional 2% to 15%.

In addition, due to its commitment to the environment and respect for nature and the communities, Atlas Renewable Energy developed a series of initiatives to protect the local culture and the environment. One of these was a plan to protect a series of heritage road traces, trails, and railroad lines that were in use during Chile’s saltpeter boom. In addition, 42 objects were collected that testify to the daily life of that era, which are being studied in Santiago and will later be transferred to the Museum of Natural History in Antofagasta. In addition, a program for the rescue, relocation, and monitoring of lizards living near Sol del Desierto was executed. This with the objective of protecting these reptiles prior to the construction of the plant.

Chile is one of the countries where a relevant growth of the industry is projected in the coming years, due to the decarbonization policy adopted by the government and the growing demand for clean and low-cost sources for the supply of large private consumers such as the mining industry. Atlas Renewable Energy is betting heavily on this market, focusing on technologies such as wind, solar, and storage.

In just a few years, Atlas has developed projects in Chile with a clear focus on the long term, both with its commercial partners and at the level of supply to regulated customers. In the country, the company sums a total of 441 MW, and in the region, a total of 2,268 MW of contracted projects across Chile, Mexico, Brazil and Uruguay, which contribute to the energy transformation of Latin America toward cleaner sources. The company expects to continue consolidating its presence in the countries where it already operates and expand into other regions with innovative and sustainable energy projects.

Atlas Renewable Energy is a renewable energy generation company that has been developing, financing, constructing, and operating renewable energy projects under long-term contracts throughout the Americas since early 2017. Atlas Renewable Energy includes an experienced team with the longest track record in the solar energy industry in Latin America. The company is recognized for its high standards in the development, construction, and operation of large-scale projects.

Atlas Renewable Energy is part of the Energy Fund IV, raised by Actis, one of the leading private equity investors in the energy sector. Atlas Renewable Energy’s growth is focused on the most stable markets in the region, using its proven expertise in development, marketing, and structuring to accelerate the transformation to clean energy. By actively engaging with the community and stakeholders at the heart of its strategy, the company works every day to deliver a cleaner future.

Is there really such thing as a free lunch in automation? Parascript's Accelerator Program is as close as it gets.