DOHA, Qatar, Oct. 4, 2022 /PRNewswire/ — Aspire Academy kicked off its 8th Global Summit in Doha, this time in collaboration with FIFA with a line-up of high-profile guests including football legends David Beckham and Arsène Wenger. The two-day Global Summit at Aspire Academy’s Football Performance Center brings together delegates to share their knowledge, experience and research in football performance and science. 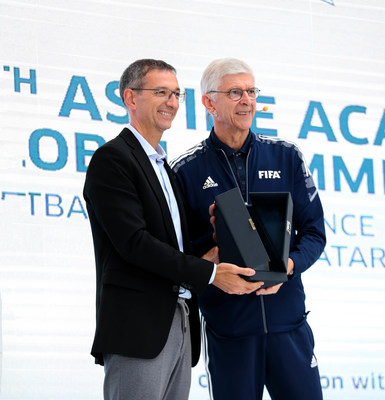 For the second time since its establishment in 2014, the Aspire Academy Global Summit is being held in person on home soil. With just 48 days before Qatar hosts the World Cup this is a special edition with representatives from all 32 teams qualified for the World Cup, joined by more than 50 members of the Aspire in the World Fellows, which includes some of the biggest clubs in global football, several national football associations as well as leagues.

In his welcoming comments, Aspire Academy’s Director General Ivan Bravo highlighted the importance of youth development in football saying it is one of the key building blocks towards the pinnacle of the sport – the World Cup. Bravo pointed out that the Summit is being hosted at the Football Performance Centre where Aspire Academy and the Qatar Football Association (QFA) converge. “We are proud that this is the home of all of Qatar’s national teams and an example of where youth development and the highest levels of football work together to ensure continuity,” he added.

Mr Bravo also invited FIFA to become a permanent partner of the Global Summit in its future editions.

Mr. Arsène Wenger, FIFA’s Global Chief of Football Development and ex-Arsenal manager, echoed Mr. Bravo’s sentiments on the importance of youth development. “I have visited Aspire Academy several times and I have always been impressed by the quality of the facilities and training here as well as the rationale behind it,” he said. “There is a direct correlation between the education and training of youngsters and success of senior national teams.” he added.

Mr. Wenger also set up the key theme for the day “Making an impact with data”. He explained how data will provide and enhanced experience at the upcoming World Cup. “There will an app for fans to get real time data in the stadium, media will have access to more statistics as will all the team,” he said.

The day’s Star Chat featured former Argentina and Manchester United midfielder, Juan Sebastián Verón in a live Q&A. He also highlighted how data can make an impact in football, pointing out that it is something clubs in Argentina have started to embrace in recent times. He said data analysis can help support players and inform their strategies but insisted creativity and skill on the pitch will always be key. He is certain that the World Cup in Qatar will be a great tournament. “The compactness of the tournament is a great benefit for the teams and fans,” said the President of Estudiantes de La Plata Club.

The day’s sessions concluded with a round table on “Making an impact with data” with panelists including analysts from Croatian, Danish, Swiss, Royal Belgian Football Associations, FC Barcelona, and Aspire Academy Senior Football Physiologist. All of whom reiterated the notion that while data and analysis are very important but can neither replace creativity nor football expertise.

About Aspire Academy:
Since opening its doors in 2004, Aspire Academy for Sports Excellence has become one of the foremost national sports academies in the world. Working as part of the Aspire Zone Foundation – an international sport destination – Aspire Academy is at the heart of a sporting revolution currently taking place in Qatar and around the region. The Academy is conceiving, promoting and implementing game-changing excellence in sports training and elite athlete development that is enabling an entire generation of talented, disciplined and committed Qatari athletes to pursue their sporting dreams.