Artprice: Sculpture, the Medium of Tomorrow thierry Ehrmann: “Apart from commemorative statues that can be found in nearly all the towns and cities in the Western world and elsewhere, big cities have always been fond of large and monumental sculptures in public spaces. In New York there are works by Robert Indiana, Alexander Calder, Jean Dubuffet and Pablo Picasso, while in Paris you can find works by César, Daniel Buren… and soon, Jeff Koons.”

Indeed, considering the number of works that have occupied public places in major cities, either temporarily or permanently, it is not surprising that some have elicited controversy… and sometimes, quite heated. In recent years, France – and Paris in particular – has been the setting for a number of art controversies such as those surrounding Paul McCarthy’s Tree (2014) on the Place Vendome, Anish Kapoor’s Dirty Corner (2015) at Versailles and Joep Van Lieshout’s Domestikator (2017) in front of the Pompidou Center.

The sheer size of these monumental works often adds to their “shock effect” as they dominate the local urban or landscaped environments. Arman’s sculpture in Beirut, Espoir de paix (1995), a 32-meter-high concrete tower containing dozens of real tanks, is a good example.

There are more and more spaces devoted to sculpture around the world: permanent exhibition sites, such as the Gibbs Farm in New Zealand or Naoshima and Teshima Islands in Japan, as well as annual events such as Frieze Sculpture held every autumn in London.

Thanks to these new opportunities in places designed specifically for the purpose, sculpture is definitively liberating itself from architecture and painting.

Sculpture on the Art Market

Collectors have long been intimidated by a medium that is more complicated to display, store and transport than two-dimensional works. However, between 2003 and 2008, the volume of auction turnover generated by sculptures multiplied 4.5 times. In just five years, worldwide sculpture sales on the secondary market rose from $245 million to $1.1 billion.

Stalled by the financial crisis, sculpture sales immediately recovered and then enjoyed two particularly good years in 2014 and 2015.

thierry Ehrmann, Artprice’s CEO and founder, explains: “The sculpture market is moving in the opposite direction to dematerialization: in a world of almost-instant flows of information, images and money, the massive weight of a steel or bronze sculpture has greater significance.

“For centuries, drawing and painting dominated the Art Market for practical reasons; but it is perfectly normal to see sculpture returning to the forefront today. A 3-dimensional work expresses greater freedom, and, in the 21st century, logistical considerations are much less challenging.”

On 15 May 2019, one of Jeff Koons’ three 1986 Rabbit sculptures will be offered for sale at Christie’s in New York with an estimated price range of $50 – $70 million. This exceptional 1-meter high stainless steel work (from an edition of 3, plus 1 artist’s proof), is arguably Jeff Koons’ most iconic work, and perhaps Contemporary art’s most iconic work as well (at least insofar as Contemporary means post-modern, conceptual or its less intellectual brother-in-arms, kitsch…).

Six years ago, Jeff Koons became the most expensive living artist on the Art Market with his Balloon Dog (1994-2000). The orange version sold for $58.4 million on 12 November 2013 at Christie’s in New York. It is unlikely that Koons will recover his “most valued living artist” title; to do so, his Rabbit (1986) would have to fetch over $90.3 million, the amount paid for David Hockney’s Portrait of an Artist (1972). However the piece may well revive the Prince of Kitsch’s market, as well as all the Contemporary Art as a whole.

The top three prices ever recorded at auction for sculptures were all hammered for works by Alberto Giacometti. With three results above the $100 million threshold, Giacometti is one of the most expensive artists in history and, without a doubt, the most successful sculptor on the secondary market.

But how did his L’Homme au doigt (1947) reach $141 million at Christie’s New York in May 2015 when there are five other versions of the same work (plus an artist’s proof)? In price terms, sculpture’s reproducibility is often seen as a weak point, but the same characteristic can also be its strength. Because owning a work like L’Homme au doigt (1947) is to share a work with the greatest museums in the world, including the MoMA, the Tate Modern and the Des Moines Art Center.

Measuring just 55 cm high, Constantin Brancusi’s The Sophisticated Girl (Portrait of Nancy Cunard) (1928) was acquired for $71 million on 15 May 2018 at Christie’s in New York, propelling the Franco-Romanian sculptor to the forefront of the global Art Market. It was the year’s best sculpture result and the 8th best Fine Art result in all categories.

In 1927, the “Brancusi versus the United States” trial marked a major turning point in Art History. For the former US Customs Service, Brancusi’s sculptures were not, strictly speaking, artworks… but the trial forced the authorities to broaden the notion of an artwork. Ninety years later, not a shred of doubt remains: Brancusi is celebrated as one of the most important artists of the 20th century. The American Supreme Court had just defined the ‘cognitive value’ of a work of art.

Artprice and the Demeure du Chaos/Abode of Chaos

In 1999, Artprice set up its headquarters within the Organe Contemporary Art Museum, which manages the Demeure du Chaos/Abode of Chaos. This open-air museum of 9,000 square meters, both free in spirit and free for visitors, is home to 5,400 artworks, 720 monumental sculptures (from 5 to 120 tons) with one currently being prepared to celebrate its 20th anniversary: a steel sculpture weighing 235 tons (measuring 3.33m x 3.33m x 3.33m).

All the raw steel sculptures on the site have been created by thierry Ehrmann, CEO and founderof Artprice, but also a sculptor since 1980, which means thirty-nine years of a passion for art that he gladly shares with visitors from all over the world. 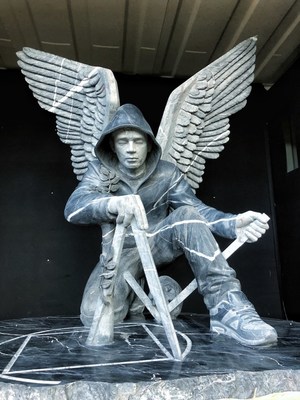