PARIS, Sept. 15, 2020 /PRNewswire/ — Unsurprisingly, the Art Market posted a significant contraction in H1 2020, although less severe than in 2009. The number of lots sold at auction fell by -21% and auction turnover dropped -49%. However, the blow was definitely softened by the solutions implemented by the major auction houses to continue trading and maintain at least some of their prestige sales afloat. 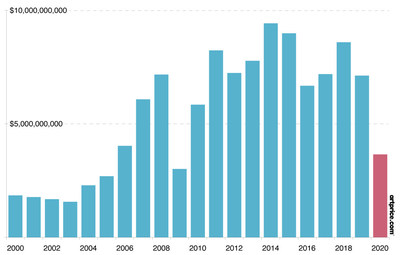 According to thierry Ehrmann, President and Founder of ArtMarket.com and its Artprice department, “During a chaotic first semester, Sotheby’s has proved there are other ways of keeping the Market alive, notably by mixing online sales and physical sales, a so-called “Bricks and clicks” approach. Patrick Drahi’s company has thus managed to maintain 70% of its turnover, and kept a very low unsold rate of just 25%. Sotheby’s ended the first half of 2020 with $1.5 billion in turnover from Fine Art versus $1.03 billion for Christie’s.

“The immense gap in digital culture that the Art Market was still facing a few months ago is on the way to being caught up. The global Covid-19 pandemic has accelerated an inevitable process described by Artprice for the last twenty-five years. The dematerialization of the Art Market is finally effective.“

The health crisis hasn’t stopped a number of artists from posting very good performances. In some cases their markets are perfectly adapted to online sales, in others, demand is so strong for their high quality works that nothing seems to dampen collectors’ enthusiasm.

Artprice looks at the markets of five artists whose prices have been maintained or have continued to climb during the health crisis.

George Condo is the most successful Contemporary American artist at auction at the moment. Demand is so high from all corners of the globe that his works sell just as well online as they do at physical auctions. In the first half of 2020, fifty-seven of his works were auctioned generating more than $22 million, including two new records.

His canvas Antipodal Reunion (2006) generated Sotheby’s first-ever online result north of the million-dollar threshold on 21 April 2020. Two and a half months later, his painting Force Field (2010) fetched a whopping $6.9 million at Christie’s in Hong Kong: a new auction record for the painter.

Nor has the lockdown/health crisis stopped George Condo’s production. As of 5 November, a solo show titled Internal Riot will present the works he produced during the lockdown at Hauser & Wirth in New York. This will be Condo’s first solo exhibition since he joined the prestigious Swiss gallery earlier this year.

Originally from Ghana, Amoako Boafo settled in Vienna, Austria, but is represented by the Chicago gallery Marian Ibrahim. He has told Bloomberg he was wary of such a sensational auction result. If he had the choice, he said, he would prefer to see his works acquired by a major museum or in a large-scale solo exhibition.

Since the health crisis began, 21 other paintings by Amoako Boafo have been offered at auction and they have all sold above their estimates… without exceeding the remarkable record set for Bathing Suit.

3. Kengo Takahashi (1982), an auction debut in the middle of lockdown

On 14 May 2020 during a Sotheby’s online sale of Contemporary art, Kengo Takahashi’s auction debut sculpture Flower Funeral Deer (2018) was acquired for $100,000. A veritable technical accomplishment in cast aluminum, this work is a unique piece that has already been shown at the Musée des Arts Décoratifs in Paris and at the Kanazawa Museum of Contemporary Art.

With this sale, the Japanese artist scored the world’s best auction debut since the beginning of the health crisis… and he certainly wasn’t alone; in fact, since March of this year, Artprice counts 356 artists who made debuts. The second best result in this ranking is for a work by Maria Farrar (born 1988) whose canvas Baguette (2017), sold for $69,500 at Christie’s on 28 May 2020.

4. Claire Tabouret (1981), a charity sale pinches her market into life

A new talent on the French artistic scene, Claire Tabouret defends a figurative style of painting (mainly portraits) with palettes of colours that are sometimes sober, sometimes flamboyant, but which always manage to impart a powerful emotional charge. Her painting Les debutantes (2014) was the flagship of a charity sale organised in Paris to support healthcare staff in the midst of the Covid-19 crisis.

A protégé of Almine Rech (in Europe), Perrotin (in Asia) and Night Gallery (in the United States), Claire Tabouret subsequently recorded an auction record of $452,000 at a Phillips sale in Hong Kong (9 July 2020) for a painting titled Les déguisements (2015).

Started in 2010, Brazilian painter Lucas Arruda’s series Deserto-Modelo attracted a lot of international attention. He was discovered by the Menes Wood DM gallery, but subsequently joined David Zwirner’s stable in 2017. His small landscapes, flirting with abstraction, have already seduced a number of art institutions, including the Fondation Beyeler and the Francois Pinault Collection.

The first auction appearance of work from this series took place in November 2019: a small oil-on-canvas executed the previous year which fetched $312,500 at Sotheby’s in New York against an estimate of $80,000 – $120,000. This year, seven of his paintings have already been presented at auction, and they have all found buyers.

Artmarket is a global player in the Art Market with, among other structures, its Artprice department, world leader in the accumulation, management and exploitation of historical and current art market information in databanks containing over 30 million indices and auction results, covering more than 740,000 artists.

Index of press releases posted by Artmarket with its Artprice department:
http://serveur.serveur.com/press_release/pressreleaseen.htm

Discover the alchemy and universe of Artmarket and its artprice department http://web.artprice.com/video headquartered at the famous Organe Contemporary Art Museum “The Abode of Chaos” (dixit The New York Times): https://issuu.com/demeureduchaos/docs/demeureduchaos-abodeofchaos-opus-ix-1999-2013
L’Obs – The Museum of the Future: https://youtu.be/29LXBPJrs-o
https://www.facebook.com/la.demeure.du.chaos.theabodeofchaos999
(4.5 million followers)
https://vimeo.com/124643720