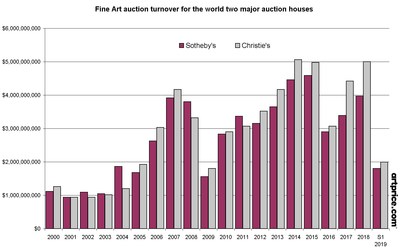 “So it’s great news for the Art Market and Artprice to see Sotheby’s – the only listed auction operator — being acquired by Patrick Drahi, a 55-year-old global entrepreneur with a portfolio of telecommunications, media and digital companies. The offer price, which represents a premium of 61% to Sotheby’s closing price on June 14, 2019, and a 56% premium to the company’s 30 trading-day volume weighted average share price, reflects Patrick Drahi’s genuine confidence in Sotheby’s capacity for exponential development via a digital mutation.”

Artprice: “Since 2000, the Art Market has enjoyed a period of distinctly virtuous growth, becoming an efficient market with a return on investment of almost 7% per year and a volume growth of 450%. For much of this period, the backdrop to this growth has been a savings environment of zero or even negative interest rates in the eurozone. Meanwhile, the market itself has evolved from roughly 500,000 art collectors after WWII to nearly 90 million Art Consumers today, the vast majority of whom are completely at ease with new technologies.”

Thierry Ehrmann: “The soft power of the world’ major powers is a powerful geopolitical driver for the growth and development of the Museum Industry®. Artprice was one of the first players to appreciate and conceptualize the global importance of this industry. As we analysed in an earlier study, more museums opened between 1 January 2000 and 31 December 2014 than during the previous two centuries. Every year approximately 700 new museums with international standing – each holding a minimum of 4,500 artworks – open their doors on five continents, representing one of the primary sustainable drivers of the global Art Market.“

For 21 years, Artprice – the global leader in Art Market information and a dedicated digital pioneer – has contributed to the Art Market’s evolution into the digital era. Its databanks are today an absolute worldwide reference in terms of exhaustivity, indices and Art Market statistics. Remember that Artprice, via external growth and R&D, was the first global player to produce algorithm indices, using Big Data and Artificial Intelligence based on the observation of billions of connections to our databanks in strict compliance with existing data protection laws around the world.

In his statement, the position of Sotheby’s CEO, Tad Smith, is perfectly lucid: he openly welcomes Patrick Drahi into the Sotheby’s family: “Known for his commitment to innovation and ingenuity. He has a long-term view with a proven track record in the field of telecommunications, media and digital companies and I strongly believe that the company will be in excellent hands for decades to come with Patrick as our owner.”

Likewise, Domenico De Sole, chairman of the Sotheby’s board of directors, welcomes the move: “Following a comprehensive review, the Board enthusiastically supports Mr. Drahi’s offer, which delivers a significant premium to market for our shareholders.“

Sotheby’s is the world’s number two Fine Art auction operator with a total turnover of $3,93 billion in 2018, behind Christie’s with $5 billion. Together, the two Anglo-Saxon giants account for over half of the planet’s Fine Art auction turnover: Christie’s for 32.3% and Sotheby’s for 25.4%. Their respective strengths are based on global coverage of the Art Market.

Despite 275 years of existence, Sotheby’s has experienced a number of relatively close  strategy changes:

Sales growth at both Christie’s and Sotheby’s has been around 400% since 2000, comparable to the 450% growth of the global Art Market over the same period.

After the announcement of Sotheby’s H1 2018 results, Sotheby’s share price dropped 10%. Despite rising sales, the company’s profits fell by 23%, a contraction that Sotheby’s blamed on its own guarantee strategy. Apparently the sale of Modigliani’s Nu Couché (sur le côté gauche) (1917-18) for $157 million – an absolute record for Sotheby’s – was not the best financial transaction of the year for the world’s second largest auction operator.

Artprice: “The world’s top two auction houses, with no rivals to date, are now both owned by French investors and collectors: François Pinault acquired Christie’s in 1998 and now Patrick Drahi effectively owns Sotheby’s since 17 June 2019.”

Artron Art Group (Artron), a comprehensive cultural industrial group founded in 1993 by Wan jie, is committed to inheriting, enhancing and spreading art value. Based on abundant art data, Artron provides art industry and art fans with professional service and experience of quality products by integrated application of IT, advanced digital science and innovative crafts and materials.

Having produced more than 60,000 books and auction catalogues, Artron is the world’s largest art book printer with a total print volume of 300 million a year. It has more than 3 million professional members in the arts sector and an average of 15 million daily visits, making it the world’s leading art website.

Discover the Alchemy and the universe of Artprice http://web.artprice.com/video, which headquarters are the famous Museum of Contemporary Art, the Abode of Chaos: https://issuu.com/demeureduchaos/docs/demeureduchaos-abodeofchaos-opus-ix-1999-2013
https://vimeo.com/124643720